I love you, Wendy Williams 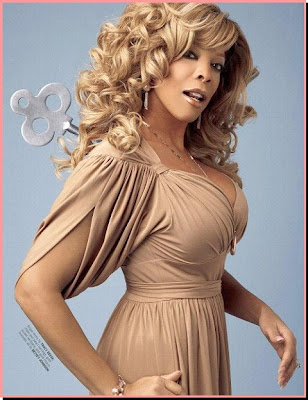 I adore former Radio personality-turned talk show host Wendy Williams. She's brilliant, and real, and funny and beautiful. She broke down recently discussing Whitney Houston's fluff piece on Oprah (sorry Oprah, it was a puff piece, Whitney refuses to own her addiction, you both devolved into soul sistah spiritual stalking and really missed the point. Forgiveness needs to be earned sometimes. ) Wendy's daytime talk show is a sassy flashy but not so trashy midday break for someone like me who works in the arts (and from home) is obsessed with pop culture and celebrity train wrecks. She has no prob taking people to task for their bs. Or calling out her own. From her wigs and fake boobs, to her miscarriages to her drug problems of yore she lets it all hang out with a casual "How you doin'?"
When Wendy calls out Whitney for not owning up to her addictions fully and breaks down I admit I was moved, I have had my own battles with various addictions and know you have to 'fess up , man up and move on. Whitney is smug about the whole thing and as for her long anticipated album- expect a full review soon- but know that its not as awful as i hope-but still really damn bad.

I also happen to really fucking hate Omarosa. She is everything I hate about reality TV. These devote narcissist think they are in fact actual celebrity with a talent to be admired. She was in fact a contentious egomaniac cast on the Apprentice because rude people make good television to a certain demographic. Here she is misunderstanding Wendy and starting an on-air cat fight. My mom taught me to be polite, life taught me to be passive-aggressive and I'm quite good at being politely cunty. Omarosa lacks that subtle art. See below:

I hate Omorosa so much. She really thinks she is way cooler and pretty and intelligent than she really is. If you read this Ommy, go back where you came from 'cuz you give women a BAAAAD name. yeesh.