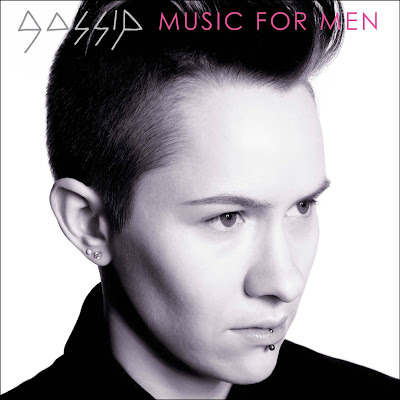 I actually thought I reviewed The Gossip's Music For Men album like-three months ago but I can't find the post, so here we go:
Arkansas born and bred Gossip have come along way from their humble basement tapes. Their raw sweaty ass shaking power however has been there right from the start. Beth Ditto's southern wail part soul singer part punk-rock Dolly Parton and guitarist Nathan Howedeshell (aka Brace Paine) have relocated from the conservative mid-west to former-riot grrl ground zero Olympia, Washington, to Portland Oregon (the new Brooklyn apparently) which is where I ended befriend Beth and Nathan both while I slaved away at my really really crap day job-I digress. In the past few years, with a lot of pride-or jealous resentment (Portland is so the epitome of the Morrissey song "We Hate It When Our Friends Become Successful") The Gossip have become a huge international sensation with fat pride flag waving, happily openly queer gal Beth Ditto challenging the notion of beauty on the covers of magazines, gay and straight. They are a house hold name in the UK and beyond, and yet here in the states their new album Music For Men has yet to be released officially.
Oh but it's coming! And its worth the wait. On Music For Men the Gossip bring back the days of good old fashioned rock and roll dance parties with anthematic songs about being broke, men in love with each other and love long distance. The lead single "Heavy Cross" is a shout out to all their brothers and sister in Portland and beyond who work dead in jobs or live on unemployment while trying to pursue their creative dreams. The album has much more of a playful experimentation about it than previous efforts, some of that no doubt to über-producer Rick Rueben and some of that their own growing interests (Nathan is quite the DJ on the side) Drummer Hannah Blilie who joined the band on the amazing Standing in the Way of Control proves once again what a damn fine drummer she is and what a great choice for this band in particular as she's really raised the percussive ass-shaking to maximum effect. The album is not perhaps as instantly as catchy as Standing In The Way Of Control but one that grows with each listen and shows a maturity and growth tempered with a sound understanding of knowing where one has come from, and embracing it, being proud of it, and bringing that pride to the world. That said Gossip are still punk rock and more than willing to school your ass on sex and politics any time. But this time they wanted to make sure their queer fans who have been there from the start don't feel marginalized by fifteen year old with "Standing in the Way of Control" ring tones. Hey kids- that's a queer anthem, not a song about the joys being a brat-just so ya know. The album is sweaty loud and sexy, just like front woman Beth Ditto herself.
Posted by Andrew klaus-Vineyard at Sunday, September 27, 2009