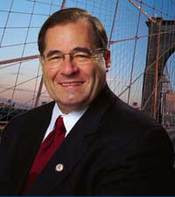 Rep. Jerrold Nadler is intent on helping gay rights in a very big way on Tuesday setting some wheels in motion perhaps to repeal the vile and unconstitutionally discriminatory Defense of Marriage Act.

Rep. Jerry Nadler (D-N.Y.) intends Tuesday to submit legislation that would repeal the Defense of Marriage Act and answer questions at a Capitol Hill press conference. The event is set for 11 a.m. at the House Triangle, near the southern steps of the Capitol Building. Nadler first told the Bay Area Reporter that he intended to introduce a repeal bill and that the legislation would only affect same-sex marriages — not civil unions or domestic partnerships...Gay Reps. Tammy Baldwin (D-Wis.) and Jared Polis (D-Colo.) will co-sponsor the legislation, but Rep. Barney Frank (D-Mass.) hasn't signed on in support."

Frank told the Blade he doesn't feel the bill can pass in the near term: "I think getting [the Employment Non-Discrimination Act], a repeal of 'Don't Ask, Don't Tell,' and full domestic partner benefits for federal employees will take up all of what we can do and maybe more in this Congress."

Frank also said he feels that lawsuits currently underway challenging DOMA have a better chance of having it overturned than legislation.