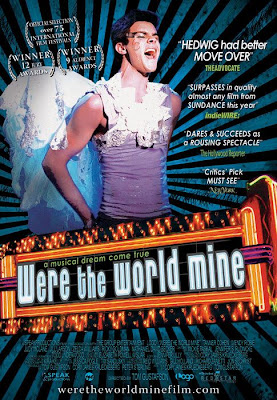 Shakespeare, young love, gay equality, and amazingly moving musical number all explode from the screen in Were the World Mine director Tom Gustafson's genre bending musical spectacle ode to love and a Mid-Summer Night's Dream. Tanner Cohen is ridiculously adorable as Timothy, a bullied queer boy at a New England prep school who's turn as Puck in A Midsummer Night's Dream set off a truly life changing chain of events, with the help of a touch of magic of course. Having seen this trailer originally last fall, and now having just (finally screened the film) let me say it does not do justice to how moving, funny and exuberant the film is and how lovely the magical realism tweaks the reality as the film progresses. While not for everyone I'm sure I have to say I feel this film is one of the better films I've seen in the past 12 months. It's smart, It's thoughtful, and It's damn sexy.

Email ThisBlogThis!Share to TwitterShare to FacebookShare to Pinterest
Labels: film, music, Shakespeare, Were the World Mine