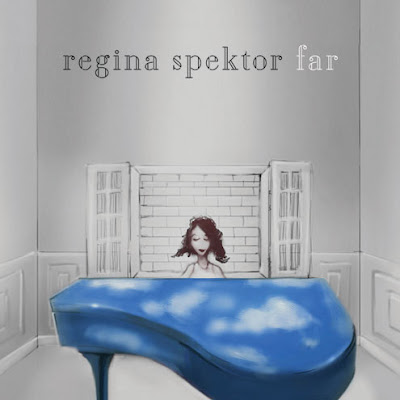 I love Regina Spektor. I do. And I really like her latest album Far. This is the worst review to write because of that, full disclosure I'm a fan. I have absolutely no constructive critique. Others have chided her for having "too many cooks in the kitchen" for the new album, too many producers diluting her sound. I disagree I see Regina as sonically expanding her sound, honing the parts she likes streamlining some of her eccentricities. Musicians make the record of where they are at that moment and the woman who wrote Far is not the same as the one who wrote Begin to Hope or even Soviet Kitsch. She sounds a bit more polished and perhaps more "radio friendly" but really what does that even mean? Radio Friendly? Doesn't a songwriter long to hear their songs on the radio? ... wait- does anyone even listen to the radio anymore? I certainly don't other than NPR and Air America.
The single "Eet" is pretty, illusive and yet comforting, and like all good Regina Spektor songs, depressing and upsetting, all at the same time (remember "Sampson" from Begin to Hope- that song still makes me want to die.)
On a technical note I love I can hear the reverberations of the piano in the room where it was recorded. The spaces between notes, I love here sing-song vocal quality which has always struck me like that crazy Jewish girl you went to temple with who forced to live with eccentric aunts that and live through books and piano lessons at home after some tragic and mysterious death of her globe trotting parents... no? no one else ? Well It's a complement. Far sounds like the soundtrack to a show written in your head. This is your life- the Musical magical stage production.
Check out the video for "Eet" below