Rapacia (The second circle of Heck) 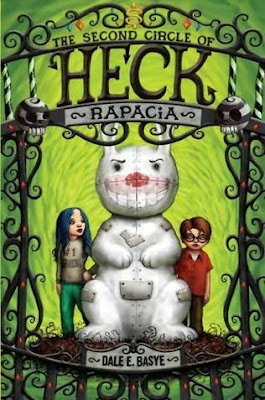 Dale Basye, the mad genius behind the book series Heck pretty much had me at hello. I was walking through Powell's City of Books here in Portland when I noticed the cover art for Heck: Where Bad Kids Go, his first novel for young adults (that a nice way of saying a kids book adults will want to read) I looked at the cover, opened the jacket and read exactly two sentences and immediately purchased the book. My husband Taylor and I have along standing tradition of reading aloud books in bed to each other, nerdy we know- whatever you're just jealous- and it's usually kid friendly fare since I'm not a huge fan of the Urban Fantasy genre he loves and he certainly doesn't want me reading him Dennis Cooper before bedtime.
Heck was the brilliantly pun filled postmodern tale of Marlo and Milton Fauster (see!! MILTON! FAUST!) who die in a tragic marshmallow bear explosion and are sent to Heck, where bad kids go. Well some confusion as to their innocence (or lack there of) ensue as does an underworld power struggle in a boarding school-like limbo where ethics are taught by Richard Nixon and Home Economics by a very perky Lizzie Borden . Obviously not just for kids.
Rapacia is the fast paced hysterically funny sequel which finds the sibling separated with kleptomaniac Marlo being sent to the second circle of Heck, RAPACIA-where the greedy kids go and Milton suddenly alive again on "the stage" (i.e. real life) trying to cope with all sorta of complications and find a way to contact his dead sister now that he is suddenly back among the living. There is also a giant mechanical ominous rabbit called "the Grabbitt" who may or may not have plans all its own for the kids.
Aimed at the 9-12 age range (really? I disagree, but hey I'm not Random House) is a great read and at 384 pages one that clips along with verve and heart. The short chapters make it perfect for a parent to READ TO THEIR CHILD. Siderant- my apologies- Parents, you really should read to your kids, not just until they learn to read on their own, but for years after. It's a wonderful bonding experience and one they will treasure for the rest of their lives. Giving them the love of literature is one of the greatest gifts you can possibly bestow upon them.
Basye's crisp cleaver writing style is so chock full of literary allusions, religious references from all the great works of civilizations past that is dizzying in it's mythological gumbo. The addition of advertising jargon in Rapacia adds another layer of metaphorical chutzpah to the work. Basye's work reminds one of a kid friendly Jasper Fforde (the Eyre Affair, Lost in a Good Book,). Rapacia is the second book of Heck which I highly recommend with a third bookBlimpo (sorta like fat kid hell-poor Virgil) on the way next July. So if you haven't already readHeck: Where Bad Kids Go- do so immediately.
Look for a full interview with author Dale Basye soon here (he said yes! Sweet! Damn now I must be clever.)
Posted by Andrew klaus-Vineyard at Friday, August 28, 2009