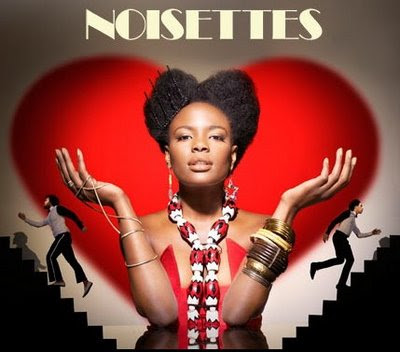 With Wild Young Hearts due out in September Noisettes (with this record they dropped the "the" from their name-don't ask) are poised to conquer things on this side of the Atlantic and go from being hip british band to NEXT BIG THING. A smashing mix of neo-soul, garage hooks and sass it's the kind of album that is so sticky sweet good that it wedges itself into your brain and you can't stop singing the tracks for months. A mix of Blondie (Parallel Lines), Amy Winehouse (Back To Black) and vintage Morcheeba (Big Calm)-but sunnier and it's own creature just the same. This is the album I'll be cozying up with folks all fall too. It's sexy and sassy and makes you dance your ass off. The plucking piano and refrain "Damn this wild young heart" from the Title track makes me want to run full on through the Louvre Bande à part style.
Singer and Bassist Shingai Shoniwa's vocals are rapturously crisp and evoke a by gone era without being slavishly imitative. It's HER sound . Check out the video for the single Never Forget You- and a special live acoustic version from T in the Park which lays to rest Shingai is a studio creation like our pop tart singers this side of the pond (Ha ha he he ha ha ho- Britney I'm looking at you dear).


Side note- I'm totally crushing on this chick! Sexy rad bassist- great vocals, great songs.
BUY THIS ALBUM IN SEPTEMBER!!!!!!!!
I've been listening to it on repeat all weekend. Love it.
Posted by Andrew klaus-Vineyard at Saturday, August 15, 2009