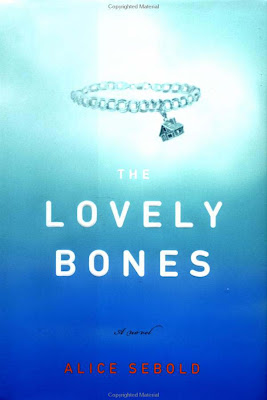 After reading Lucky, Alice Seabold's truly harrowing and remarkable memoir I avoided reading her debut novel, the critically acclaimed The Lovely Bones. I'm broke down and decided to give it a whirl because Peter Jackson (my favorite director from "Oceania" since Peter Weir) is directing the film, his first-what'd I'd call drama- since the incredible Heavenly Creatures (in the mean time he made the Frighteners, remade an epic King Kong oh and those three little fairy tale movies, you know The Lord Of The Rings) and I refuse to see it without having read the book first. That's just how I am.
I still worked day jobs , back in the day, when Seabold's novel arrived new on bookshelves across the globe. I worked at a Barnes and Noble booksellers in suburban North Carolina. One day while i was tediously manning the register a woman returned a copy of The Lovely Bones. I'm not sure why- we had fairly loose return policies back then as long as you had a receipt-but I asked why she was returning the book. I knew very little of the book but her answer stunned me: She found the book offensive to her faith and to her belief in heaven. I didn't argue or pry I simply did the return but it stuck with me that a book so many people I know raved about, a book I have avoided reading until now. Reading the novel I'm not slightly offended by the depictions of heaven found with in(well how could I see my review for Heck/Rapacia) and to be honest I don't offend easily. I'm saddened that the horrific violence and injustice of the story did not impassion this woman, no it was she was disturbed by the concept of individualized heaven. She missed the point entirely in my opinion.
So I love the book, like most of you already do, so heres our first look at what I'm sure will be Peter Jackson and WETA's next trip to the Oscars.
Sidenote- Susie Salmon is played by Atonement star Saoirse Ronan whom all my friends hate with a passion usually reserved for Hitler and Franco, we blame her character Briony (and thus vis-á-vis Saoirse Ronan) for all the ills of the world from a dead iPod to global warming to traffic to bad hair days. so it's going to be hard for some of them (Matthew) to root for poor little dead girl after wishing her dead for so long.
It's not her fault she was just far too good being a character from literature we all hate.