A is for Accident 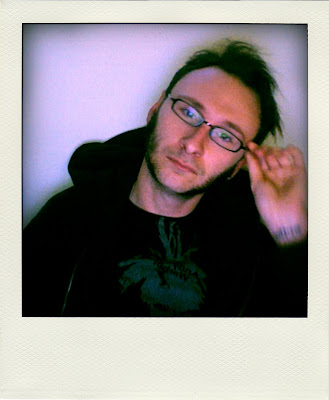 A is for Accident- my own on-going music project/band is a strange beast. Picking up where I left off sonically with my last Souhado album (2003's Continental Drift) A is for Accident is a largely electronic endeavor, which is strange coming from a guitar and bass based noise rock outfit (Spacecadet, 70% of my solo recordings) But I have always loved electronic music, I must be clear though, I do not make dance records, well not traditional ones at least. There were some brief forays into pop territory on Selfish but largely that album was an over-stuffed eclectic mix-cd of breakup songs, a collection ,very goth tinged bedroom rockers (a onetime possible title for the record)
Make no mistake I'm not dismissing Selfish, I'm very proud of that record, it's very existence is an act of willful defiance. It was recorded over five years which means many of the songs and their emotional resonance were simply in the past for us. Alas Julie Baird my musical soul mate is taking an extended leave of absence due to some medical issues and I must say her absence is deeply felt. But for Jules' sake (she's be pissed if I stopped-trust me) I'm prepping a new A is for Accident album, The Good Prince with Beth M. Peterson stepping up to provide much support after her amazing contributions to Selfish.
Where much of Selfish was industrial pop tinged and largely built on loops and samples The Good Prince couldn't be further from that genre -though loops and samples still are there, just in unexpected ways this time. Thematically based on myths and fairy tales and sonically somewhere between the Magnetic Fields and Björk I have to say the demos alone are some of my proudest work. Many of the songs are stripped down simple compositions that suddenly are at once both alien and familiar. Some are 21st century folk songs others are are Bollywood pop and still others are fully orchestrated and gloriously baroque courtesy of returning producers Yves and Ys dans Paris who have helped me edit down my sometimes schizophrenic sounds into a cohesive whole. Look for the first advanced single/video in the coming weeks (late September I believe)
Until then here's another sneak peak.
" Sea and Sea"

Sea and sea - A is for Accident
Posted by Andrew klaus-Vineyard at Saturday, August 29, 2009