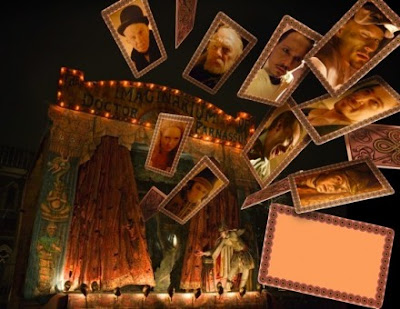 Heath Ledger's death cast a shadowy pale over visionary director Terry Gilliam's new film The Imaginarium of Doctor Parnassus his follow up to the vulgar cinematic atrocity Tideland (a film I hated so much I could not turn off and have recommend to dozens of people you sorta have to see it to believe how far off the mark it goes.) After his star died leaving the film only a third complete Johnny Depp, Colin Farell and Jude Law stepped in to play Ledger's dimension jumping clown on a mission to save (Christopher Plummer) Doctor Parnassus' daughter from the Devil (Tom Waites!!!!). The actor's all donated their considerable salaries to a fund for Matilda, ledger's daughter with equally gifted actress Michelle Williams.
Here is our first look at the international trailer. It looks amazing, a return to high and proper form for Gilliam and a fitting final curtain call for Heath Ledger, an actor who's brief career left a number of daring imaginative and stunning performances.