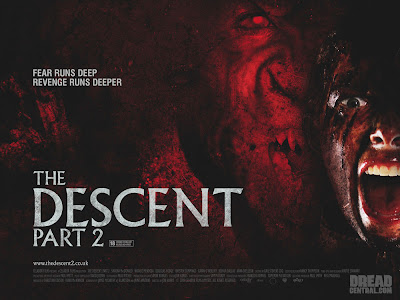 Okay so, I checked it out so I can say fairly safely that here is the spoiler free trailer (ugh unlike the last one I saw-I'm still furious ) for the über-anticipated sequel to the unmitigated horror masterpiece The Descent directed by Neil Marshall (Doomsday, Dog Soldiers) . Sadly Marshall isn't returning to the director's chair, but the film looks in great hands of editor-turned-first time director Jon Harris (Stardust, Snatch, Layercake, the original The Descent) .
The original Descent told the story of six female extreme sport athletes suffer a devastating tragedy when the husband and child of one friend die in an automobile accident a year later they reunite to go spelunking. Even before the "creatures" in the cave appear the taunt claustrophobic film left audiences breathless.

Though I would like to point out who terrible this advanced festival rush poster is. So not a fan.
Posted by Andrew klaus-Vineyard at Sunday, August 30, 2009