Dark Night of The Soul 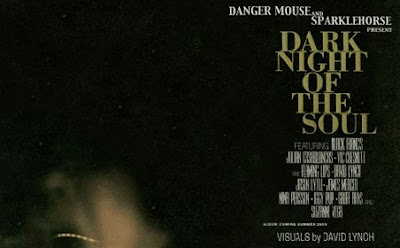 The art of album making is a dying one, especially with the interference of record execs and compounded by the digital download age. It's all about hit singles and remixes of said singles. Artists used to make great concept records (some still do!) but most these days try very hard to create a neatly packaged collection of hits. Danger Mouse the brilliant producer/multi-instrumentalist knows the fine balance (Dangerdoom, Gnarls Barkley, Gorrillaz) of creating best selling artistically adventurous ALBUMS. Ones that you listen to over and over again, high concept (often ass shaking) records that seem into your subconscious. So does Mark Linkous of Sparklehorse (Good Morning Spider and It's A Wonderful Life are jaw droppingly amazing song cycles that you should already own! Totally judging you... ) So when these two great minds met to discuss a collaboration concept album they came up with the idea of doing an art book to go along, with the record being the soundtrack. Enter film-maker, author, artist, transcendental meditation lecturer, coffee enthusiast David Lynch (swoooon! I currently have INLAND EMPIRE just randomly playing in the background) to shoot a photography art book resulting Dark Night of The Soul . Danger Mouse and Sparklehorse share the credits for the music and vocal duties fall to an impressive lineup of guests: Nina Perrsons (A Camp, the Cardigans) Julian Cassablancas (the Strokes) Black Francis (Frank Black, the Pixies) Wayne Coyne (The Flaming Lips) Jason Lytle (former Grandaddy) Suzanne Vega, Iggy Pop, Vic Chestnut, James Mercer (The Shins), Gruff Rhys (Super Furry Animals, Neon Neon, Candylion) and David Lynch himself all lend a hand.

Due to longstanding tensions between EMI and Danger Mouse the book will be published with a BLANK CD-R !!!! The album was leaked online for fans to find and download through whatever means necessary and then burn onto the furnished blank CD accompanying the book , effectively saying FUCK YOU EMI! This is how we roll! ( - I bet they said something better but its still hot I'm not firing on all cylinders here.) I have it. I'm bragging. I love it. My pick for one of the best records of 2009, though sadly it may never see a proper release. BUT....
you can hear the whole thing here at National Public Radio (God Bless NPR!!)