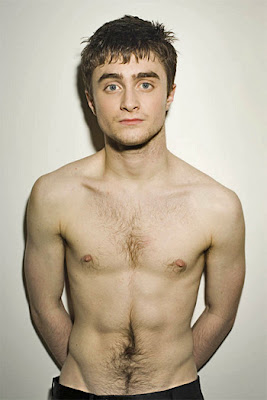 Daniel Radcliffe (Equus, December Boys, FREAKIN' Harry Potter) just became a big bucks benefactor to the LGBTQ Youth group The Trevor Project who's work runs a nation-wide much needed suicide prevention network. The 20 year old Brit, who became part of The Trevor Project's "Circle of Hope" a group of major final backers had this to say. Here's a sobering fact in the past year alone The Trevor Project's call volume has increases 300% .
"I am very pleased to begin my support of The Trevor Project, which saves lives every day through its critical work. It's extremely distressing to consider that in 2009 suicide is a top three killer of young people, and it's truly devastating to learn that LGBTQ youth are up to four times more likely to attempt suicide than their heterosexual peers. I deeply hope my support can raise the organization's visibility so even more despondent youth become aware of The Trevor Helpline's highly trained counselors and Trevor’s many other resources. It's vitally important that young people understand they are not alone and, perhaps even more important, that their young lives have real value.”
(via The Trevor Project)
Learn more about what you can do to help the nation's ONLY nationwide accredited suicide prevention hotline and services for LGBTQ youth Here ! For those of us who survive our own youth, it is our responsibility to make sure we have a community for tomorrow.