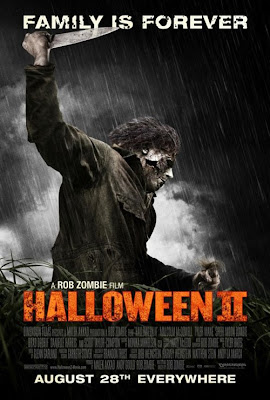 I unabashedly loved Rob Zombie's re-envisioned Halloween a few years back and am excited to see his follow-up sequal this fall. Check out the second trailer below. I think Zombie is highly underrated as a director and really respect his vision of Halloween, as it is perhaps the only "remake" of a horror classic we've seen lately that I felt stood on it's own. It was well aware it would never be the classic genius of the original John Carpenter film, a small indie that launched the career of Jamie Lee Curtis and practically invented the slasher sub-genre. It was however a compelling, graphically violent and fairly mesmerizing study of madness, family ties and the legacy of violence. Sheri Moon Zombie was genuinely heartbreaking as a mother desperately trying to understand her murderous institutionalized young son, loving her son even after he'd slaughtered his older sister and mother's no-good boyfriend in the films extended back story.  I'm keen on the changes Zombie is making to keep this new version fresh and honest. It will , like the original sequel pick up moments after the first film ends and our poor heroine Laurie Strode's night  of terror continues but as the first Zombie helmed Halloween had it's own back story this one will recount the events of Halloween 2 (1981) and then jump 2 years finding Laurie a disturbed traumatized young woman acting out her issues and Annie (a survivor of the first superbly played by Halloween franchise veteran Danielle Harris) an agoraphobic mental patient. While this doesn't exactly look like the joy ride kinda horror of Sam Rami's over looked but critically beloved Drag Me To Hell I do look for to spending 2 very long dark and twisted hours in the dark with this vision of uniquely American horror.