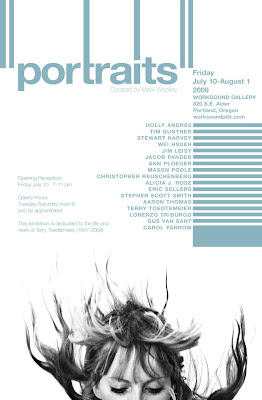 Portraits, curated by Mark Woolley and featuring new works by Jacob Pander, Eric Sellers, Holly Andres, Gus Van Sant among many notable others was by-far the art opening of the summer.  In the sweltering heat highbrow and lowbrow hob knobbed at the industrial district adjacent Worksound Gallery( 820 S.E. Alder ), a cavernous space well suited for the huge crowd that turned out to see the eclectic and remarkable top shelf of Portland's modern photography crowd.   The crowd spilled out onto the street, an informal art block party and Facebook would have been envious of the  networking buzz ( a flesh and blood social networking site? Is this what we used to do?) . It felt oddly un-Portland, it felt East Coast- Brooklyn just before the Williamsburg backlash that started in (3-2-1-now!) and rightfully so- as the work was  uniformly commendable . Rising art star Holly Andres showed new pieces that fell neatly between her series work  but were very much of her canon , brilliant and striking as ever. Eric Sellers' work was provocative and lush and Gus Van Sant's striking  blown-up "polaroid" casting shots of teen boys identified in the photo only by their casting ID number for his acclaimed feature Paranoid Park, walked a thin line between lascivious adoration and blank affect documentation.  By and large it was a smashing success and one I'd like to see replicated at more opening in the future.  As our city struggles through it's growing pains in this economically dark time a thriving art scene is necessary  to thwart metropolitan stagnation as well as to reflect back to us why it is we choose to live in this frontier state. What makes these iconoclasts move from their homes (or stay locals) in a pioneer state city temperate rain forest? The opening wasn't just a see and be seen scene it was a celebration of the art OF seeing, and Being Seen. Thoughtful impressive work all around. I encourage everyone to check it out if you are going be in the Portland area now through August 1.
Posted by Andrew klaus-Vineyard at Saturday, July 11, 2009