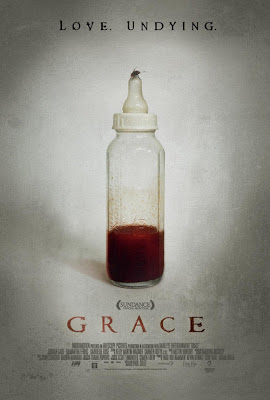 Official selection for numerous film fests  Grace is one of a growing new crop of promising horror films about children (Orphan and The Children being two more on my must see list) I'm still hesitant of the It's Alive remake-to which Grace bares a passing similarity, though Grace seems far more unsettling to me personally. Check out Grace below, but be warned this will not be a film for the squeamish or the easily disturbed. I was describing it recently to three film buff friends who alternated between heartbreak and revulsion at the storyline:
After 2 miscarriages a young couple is eager for the arrival of their daughter Grace, but a tragic accident kills the unborn Grace her mother makes a difficult and controversial decision to carry the infant to term a few more weeks. Much to everyone's shock after the birth Grace is revived. When signs begin showing that the miracle baby has a few problems Grace's mother makes the unthinkable choice to keep her daughter alive and healthy the only way she can... See for yourself if you can stomach it in, Grace.

I watched the trailer and was horrified and intrigued equally. It is an interesting premise but really disturbing. I have a feeling it will be like "Funny Games" where I watch it once and then never watch it again.