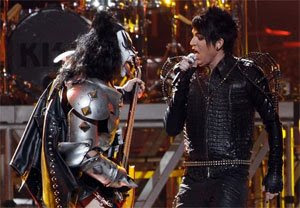 Gene Simmons of KISS has been struggling for a foot hold into sustained cultural relevancy for sometime now. He "stars" in a repulsive reality series called Gene Simmons' Family Jewels where he and his pampered family tool around their mansion mom and dad get plastic surgery together and the kids spend lavish amounts of cash. KISS were never a favorite of mine, i found their theatrics entertaining enough but there really just a pop act with a gimmick that has past it's prime in my humble opinion. Their recent appearance on American Idol was rather tuneless affair and they were paired with vocal powerhouse and glam rocker Adam Lambert. HE recently appeared on a LA Fox News morning show to plug every single venture he had a tie to , which was sickeningly tacky but then talk turned to the aforementioned Adam Lambert where he said:

"Mostly he should shut up about his sexual preferences. We, America, the rest of the world, really don’t care. I mean, if the story becomes ‘I prefer farm animals to,’ you know, who cares? Be quiet about what it is you do indoors and go out there and sing."

Weeeeell, that didn't set too well with a lot of people and Gene's response was this:

I don't think I've been talking smack at all. In fact, if anything, I've been soft-peddling. He's enormously talented, best talent 'American Idol' has had, but I think he killed his career because now the conversation is not about his talent but about his sexual preference. He's done. You're forcing people to deal with issues they may not be interested in. Life is unfair, and the masses don't all live in L.A. They live in Wisconsin and Nebraska, and you're on crack if you think the same rules apply there. My advice is still the same, shut the f*** up, just sing and let people say whatever they want. But I do wish him the best because he's got all the talent in the world. If only the world was not homophobic, but it is. I would be the first one to vote for equal rights for gay women and men, and get the church and the state to stop telling everybody how to lead their lives, but do I think he's killed his career? Oh, in an instant. I hope I'm completely wrong. I hope he becomes the next Beatles and proves me wrong."

Adam hasn't even released an album yet and his career has been killed? I think Gene Simmons is so misguided and comes off as a closet homophobe, which is ridiculous coming from an old man who makes a living pimping out his family on basic cable and dressing up in clown make-up and fake armor to play "rock" songs.
Posted by Andrew klaus-Vineyard at Friday, July 03, 2009