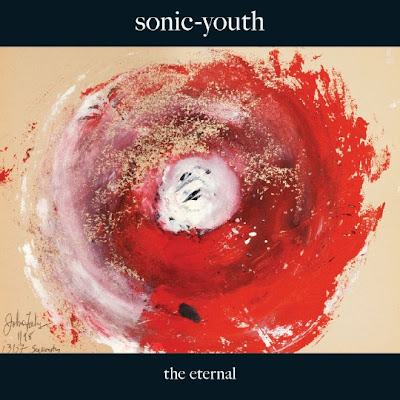 Sonic Youth return to their indie roots (now on an indie label for the first time in decades) with The Eternal a black metal influenced rock set which slices through the meandering soundscapes of the excellent Sonic Nurse and builds on the amazing return to form of Rather Ripped making The Eternal easily their best record since 1995's masterpiece Washing Machine.  In fact it feels plucked from those seminal 1988-1995 years Sister to Washing Machine when Sonic Youth were the last word in cool. This time out the band has added former Pavement bassist Mark Ibold (who's presence on the latest Free Kitten album was sorely missed) for their 16th album (now on Matador) and the band sounds completely re-energized. As with the past few releases it's kinda Kim Gordon's show. Her songs tend to be the most raucous and direct, but this time the boys set out to prove they are no slouches either. This really is THE guitar record of the year-hands down.  Songs about the late Gregory Corso and Bobby Pyn (Darby Crash of the seminal queer punk band the Germs) add a sense of nostalgia and the cover art is by legendary guitarist and writer John Fahey (How Bluegrass Music Destroyed My Life)  Check out two great live performances from Later with Jools Holland below! This is gonna be on heavy rotation here at the home of Digging To China all summer long.
01 "Sacred Trickster"
02 "Anti-Orgasm"
03 "Leaky Lifeboat (For Gregory Corso)"
04 "Antenna"
05 "What We Know"
06 "Calming The Snake"
07 "Poison Arrow"
08 "Malibu Gas Station"
09 "Thunderclap For Bobby Pyn"
10 "No Way"
11 "Walkin Blue"
12 "Massage The History"
Posted by Andrew klaus-Vineyard at Tuesday, June 09, 2009