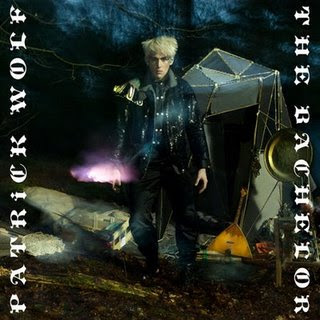 In all my hubbub  posting singles and videos from the new double disc Patrick Wolf album I forgot to actually review it. so here we go.
The Bachelor is the first installment  of a two album set (The Conqueror coming in early 2010) and finds Patrick in a fighting form, all the songs railing against the current state of the world, at loneliness and all the dramas of modern life, voicing insecurities and foibles while countered with encouragement from  Tilda Swinton's (yes THE Tilda Swinton) spoken work accompaniment as "the Voice of Hope"  . Its a cohesive, brilliant and beautiful album that is much more edgy and electronic than the majestic The Magic Position and angrier and more akin to his debut Lycanthropy which The Bachelor 's cover art nods to with his stance and the positioning of the text.  Guest muscians besides the brilliantly utilized Tilda include former Atari Teenage Riot main man Alec Empire, avant-electro pioneer Matthew Herbert and folk singer Eliza Carthy. This is one of the must have records this year as will The Conqueror be next year.  Patrick fell in love with a boy named Will while making the record originally titled Battle and a plethora of new songs of love and hope sprang forth as the relationship grew. (side-note Patrick and Will were arrested and beaten by police for kissing at a Madonna concert this past September) He decided that pre-Will songs became the angrier edgier The Bachelor while songs about Will and their growing love affair would make up The Conqueror.