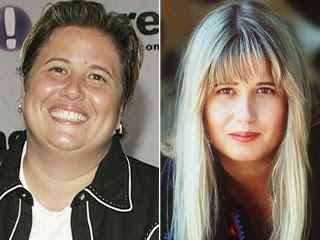 I took some flack for not writing about Chastity Bono's transition from female to male. I didn't because soooo many media outlets covered it and well I sorta just shrugged my shoulders, It was Pride Weekend here in Portland , I'm broke and not really feeling it... but then Sarah (who's becoming a contributor to Digging to China soon!) and I had a brilliant cross country  discussion about the name CHAZ!!! Straight up- we hate it. It's her childhood nickname, fine, but kinda an easy out as far as mens names go. It'd be like Sarah's hella awesome daughter  changing  her name to GOOSE (which we all call her) Though I did have the idea if she did then her little  brother  could become Maverick and we could have them re-enact out favorite scenes from Top Gun at the Holidays but Sarah said no as Sarah Palin  ruined the word Maverick for everyone. Which is kinda true. I just heard her harpy voice in my head every time I typed it. Maverick. Ugh.
I digress. We had a friend who was transitioning and was really partial to changing his name to DYSSICK (pronounced DIsaac or Dies-ick)  um NO (love you Dylan) . I think if you have a friend out there dear readers and they are transitioning from one gender to another, tell them you love them and support them, and then give them a baby name book. And ask for veto power. Its where they need you most.
Posted by Andrew klaus-Vineyard at Monday, June 15, 2009