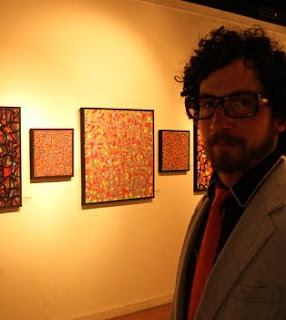 Portland based abstract painter John Graeter is one of the busiest artists around these days, having shown almost nonstop since he landed in Portland a few years back. Grater's self described "alien graffiti" paintings were all the rage at last months first Thursday showing at the ANKA gallery out-selling any most other artists' shows that night. Affordable and desirable is a healthy economic combo in art.  I had the lovely opportunity to interview the up and coming artist who's bold colors match his bold personality and style. Here's part 1 of my profile of John Graeter.

Digging To China:    You’ve said that the title is the primary reason for your work and the painting come secondary, which is a very Damian Hirst like declaration, care to elaborate on your process or was this sarcasm?

John Graeter: The title of the work is everything. I’m a writer first, artist second. The title is a story that creates an experience and creates a mood around each painting. Each painting then becomes an opportunity for engaging the viewer for ten seconds with a skit about political, social, cultural and historical issues. I address these issues the same way I make my art. Each title comes to me in a free-associative, spontaneous waterfall, which I dictate word for word, brush stroke for brush stroke, onto the paper and canvas. These titles just come to me from outer-space when I’m sitting on the porch in the morning, drinking green tea and staring at a tree like a dumb monk. I’ve written an entire free-associative novel this way. The titles are a humorous and sometimes absurd reminder to me and to the viewers, not to take art or the art world too seriously, I guess. Some people take themselves, their ego and their art so seriously it makes me worried sick. 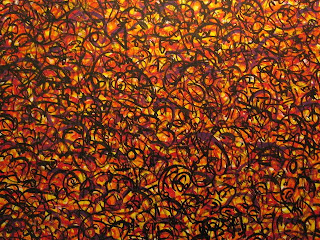 DTC: Your concept of “alien graffiti” is an interesting one, your work has a very neo-expressionist meets pop art (1970s-80s) New York feel. How is that aesthetic approach cultivated in such a distinctly West Coast city like Portland Oregon?

JG: Fascinating question. I grew up in Washington D.C., and was intrigued by and immersed in the punk-rock, reggae, hip-hop and underground graffiti culture from middle school onwards. Scrawling, writing, tags and even strewn vomit, garbage and feces on alleyway walls, subway seats, housing projects, garbage can tops and sidewalks made a big impression on me from the get-go. I don’t necessarily respect or admire all of it, but it carries a pure, raw sense of a universal human language and communication. It’s also a dire or desperate instinctive momentary expression of one’s unconscious identity. Graffit’d bathroom walls fascinate me for this very reason. I love all bathroom walls for this reason. Honky-tonk bathrooms. School bathrooms. Gas station bathrooms. Look at the Backspace bathroom, in downtown PDX. Unreal. Scores of layers of tags, names, stickers, colors, cross-outs, circles, dashes and more.  I mean, look at that alien communication. That’s the best piece of alien graffti-ass I’ve seen in all my life, man.

DTC : You’ve show fairly steadily in Portland since 2005, what’s the secret to landing so    many spots?

JG: There’s no secret, really. I land shows today the same way I scored them six years ago: DIY guerilla promotion and marketing. I take right to the streets, bring my portfolio and a savage, sincere handshake, talk it up with the owners, and either I land one or I don’t. I am a highly motivated, positive and energetic artist and I believe that the only way it can be done right, is to go out and do it yourself. It’s also a good opportunity to introduce yourself personally to the world, to meet folks, see galleries get the ins and out’s of the art world, see what people’s interests and tastes are, get rejected, lose some ego and carry on with a positive attitude. Attitude is everything. Gotta keep it positive in the art world, or you’re done for.

DTC: Can you describe your workday process for our readers. How long does each piece take on average; your color combination choices, the aforementioned titles?

JG: I am savagely pragmatic and disciplined carpenter when it comes to creating a series of work. First, I cut however many door-canvases I’ll need for the show. I sand, fill, smooth and gesso everything. I’m a fiend for this.

Everything is now ready to paint, ready for spontaneous combustion. Here comes the painting, baby. I work on multiple works simultaneously, surrounding myself with ten or twelve paintings at a time, doing a layer here, a layer there, and laying them all out so I can gain a more cohesive idea of color, design and flow within a series of work. Depending on how much caffeine I drink, how much exercise and sleep I get, I can usually bust out twelve “30” by “30” acrylic and ink works in two weeks, working 12-16 hours a day. The spray paint works take less time.

When all the painting is done, I resume into carpenter fiend mode, and frame everything with the Douglas fir. I love the framing part. Exact measurements turn me on and fire me up like nothing else. Especially when I’m under pressure and freaking out about a deadline. My neighbors can here me scream to myself late at night in the studio: “God, yes! John, you fucking stud!!”  Then I laugh maniacally and my stress evaporates. Humor is everything.

DTC:  You work on recycled surfaces and with found objects how important is   sustainability to you and the arts in general. 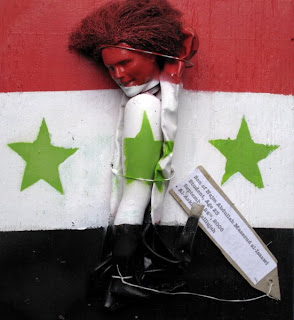 JG: Thank you for this question. Sustainability, recycling and re-using is a very important, integral part in my artwork. These days, I paint exclusively on recycled doors. I used to dumpster dive and paint on old tables, chairs, shower curtains, carpet and scraps of wood. Now that I frame all of my 2-D work, I need consistent measurements. Oh yeah, that’s another thing that get’s me really excited. When I find a good, solid door that measures 30”+ in girth, I get major wood.

My other realm of artwork, which includes combines, collages and Dadaist, sculptures, is what I am most passionate about making, before, during and after the act of creation. These works are created spontaneously, in a free-associative, hurricane-force manner and are made from recycled or collected junk from everywhere. I re-purpose lots of recycled door hinges and door hardware into these works. I’ve also used exhaust pipes, rocking chairs, shoes, leaves, condoms, Barbie’s, knives, mustard, wine, urine…oh, just about everything I guess.

DTC: How do you feel about the current state of affairs of the arts in America given the economy and the past eight years of political oppression and censorship?

JG:  I feel that all art, including music, theatre, movies and visual art has the capability and will to create, destroy and overcome any recession or amount of political oppression which is imposed upon them.  Art is revolution. History has proven this again and again. The variable, I think, pertains to who is creating the work, and for what purpose. Creating a piece of work is one thing, but what is the intention, energy and vision behind the work? The current state of affairs in America is a difficult pulse to place, even being an art and news junkie. I’ll stick to Portland.

During the past several years in Portland I experienced several types of reactions to both the recession and the last eight years of politics. A few artists addressed these issues in a rather matter-of-fact, head-on manner. For example, one artist was angry about Afghani civilian deaths, and they were letting everyone know by displaying photos of dead children and women. That’s the reality of war. It’s real. Other’s, like Corey Smith’s new show about robotic warfare at the Backspace, creates an important political discourse and dialogue by also observing and reflecting upon the realities of war. On the wall are fifteen 30” by 30” enamel photos of black bomber drones, all lined up in perfect synchronicity. It’s the power of suggestion and the power of reality. Take from it what you will. How does it make you feel? It’s up to you. Get involved. Think. Be active about your judgment. That’s real.

There’s another echelon of Portland art, which attempts to address the current climate and state of affairs. Its called obnoxious, PBR-drenched hipster-esque cynical Anime irony-infused fluffer fuck art. Being bitter and resentful and failing to be constructive with your time is just as bad as the war crime or freak political figure your addressing. Political and social statements are more easily digestable, constructive and effective when they don’t alienate the viewer or audience. I’m not talking about shock art either. I’m talking about half-assed bitch and whine art. Listen to me, I’m whining right now. Getting bitter and snarky about something is an instant turn-off in my world. I say stop bitching, being lazy and go do or say something for real. And do it all the way. Go big or go home. That’s the DC east-coast mentality in me. Stay positive. Stay up.

I’d like to see much more street-art in Portland. In times of political oppression and economic downtown, many artists have in the past turned to the streets and city walls for canvases to express and communicate their grievances. I dig street art above all other forms of easel “art.” If done right, with some thoughtfulness, design and respect, it can stir a city or nation to its feet. Street art, stenciling and graffiti is much more prevalent during such times in other U.S. cities and nations across the world. Look at NYC, Philly, DC, London, South America, Brazil, Japan, Mexico, Germany, Spain, France, Tokyo, Greece…I’d like to see some more Banksy’s and Basquiat’s running around PDX. PDX might just be too clean and orderly a city for street art. I completely respect that. We live in a beautiful city. 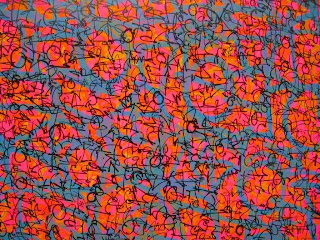 DTC: You have this great solo show up at the ANKA Gallery what’s next for you?

JG: I want to now focus my attention on Portland City Art. Portland City Art is a non-profit that Portland artist Chris Haberman and myself founded this year. We will be working with emerging and established Portland and national artists, curating group art shows, community art events and fostering public community art. We curate the Olympic Mills space in SE PDX, and will be putting on two enormous group shows this summer. There’s a lot to be planned and I am still in the middle of writing a mural grant to RACC.

As for my art, I think this show reached a whole new level for me. With the amazing help and vision of gallery owners Anna and Graylan King, we together realized a new level of potential for my art. I salute to them. They are truly wonderful, one-of a-kind people and gallery owners.

I’ll be submitting to galleries outside of Portland this summer. I’m actually thinking about Shanghai, Tokyo, Brazil and all over the place. Why not? Shoot for the stars, just keep it humble. Being humble is the key. Have some ego, but not a lot. Work passionately everyday, and walk the street like it’s the first day on the job. 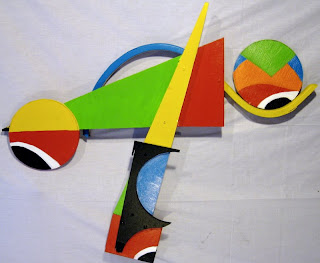 Check out tons more of Graeter's ecclectic work at his site here!