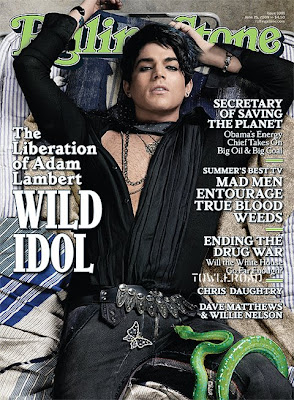 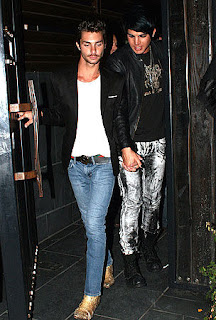 To the shocks of  tens (well that one girl below at least), Adam Lambert has come out in the new issue of Rolling Stone.  It's pretty funny and unnecessary  but he manages to be professional, real, and still have time to take a swipe at that bloated sour grape Clay Aiken, who famously threw a temper tantrum about Lambert. I suppose Clay's only claim to fame was the gay Idol so  Adam stole his "thunder" . Well whatever. The major issues seems to be looking at Adam  you can't help but think he totally gets laid (and has a smoking hot boyfriend Drake Lebry) as opposed to Clay who looks like a middle aged lesbian aunt who you'd do your damnedest not to picture naked... ever.

"I don’t think it should be a surprise for anyone to hear that I’m gay. I've been living in Los Angeles for eight years as a gay man. I've been at clubs drunk making out with somebody in the corner...Right after the finale, I almost started talking about it to the reporters, but I thought, ‘I’m going to wait for Rolling Stone, that will be cooler. I didn’t want the Clay Aiken thing and the celebrity-magazine bullshit. I need to be able to explain myself in context. I’m proud of my sexuality. I embrace it. It’s just another part of me....[Ultimately], I’m trying to be a singer, not a civil rights leader."
He also gave a nice shout out /compliment to Kris Allen when asked about being the roommate with the married, straight and kinda cute Idol winner.
"They put me with the cute guy. Distracting! He's the one guy I found attractive in the whole group on the show: nice, nonchalant, pretty and totally my type — except that he has a wife. I mean he's open-minded and liberal, but he's definitely 100% straight."

I'm sure this deranged gal is absolutely heartbroken now, given how passionate and well founded her stoned rant on Youtube was. Check out the brilliance below.