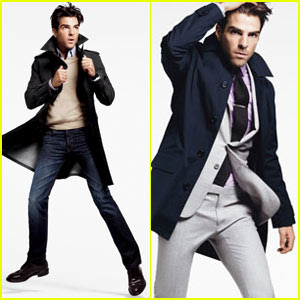 First off let me just say I can not believe I am blogging about the new  J.J. Abrams reboot of Star Trek. I used to live with a man who was a rabid trekkie and I grew to despise Star Trek and all its various incarnations. I watched Star Trek:the Next Generation like most nerdy boys and girls my age when it was originally aired. I admit that. I also admit I think Star Trek: The Motion Picture is unwatchably dull and I prefer Star Trek IV : The Voyage Home to Star Trek II :Wrath of Khan. All of which is pretty much blasphemy to die hard Trekkers.
That said- Star Trek (the reboot) is amazing.

The cast are pitch perfect and it hits all the right notes to pay homage to past events and characters while thankfully moving forward. It's a surprisingly moving film at times as well. So much as been written lately about rising star and new Captain Kirk Chris Pine, who is lovely and quite good in the roll, that I decided to devote a second to the (allegedly gay-damn glass closets) Zachary Quinto (Spock). So sexy and dashing Quinto is mum on his personal life- does that really work any more? Regardless Star Trek is actually his feature film debut after an impressive resume of bit parts on television  (oh and yeah that NBC show- Heroes maybe you’ve heard of it.) He actually has some rather smoldering onscreen scenes with Zoë Saldana (who plays Uhura), but really the "bromance" is the attraction here. It drives the plot and everything we know that is to come (or has it come before…)

And I have to say Mister Quinto is a mighty fine man and this was really just an excuse to post these shots from the April GQ  of him modeling-um- raincoats.

Remember guys always wear a raincoat
Posted by Andrew klaus-Vineyard at Saturday, May 16, 2009