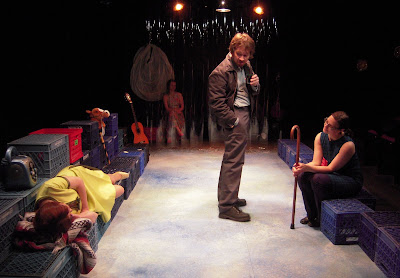 Two Portland theatre luminaries are set to drop their curtain on the city and move on to new endeavors on the east coast. defunkt theatre is sending off co-creative directors and actors James Moore and Frances Binder in style with the world premier of Gary Winter's Cooler.  The episodic comedy tells the story of four damaged and eccentric individuals who seek refuge from the harsh realities of the outside world by living in a giant cooler. It also weaves stories and songs of the last Russian Cowboy, a rhinoceros with no desire for self-reflection, reading scripts for bad french bodice rippers, and a rather impassioned defense of Cher as a serious artist. While these disparate strands are woven together,  the refugees try to make sense of their world and/or each other, which is not always an easy task with this delightfully off-kilter bunch.  Rounding out the uniformly excellent cast are new-comer Cyndi Rhoads as sexually frustrated Pearl/ Cher (no really, THAT Cher)  and defunkt theare company member Naomi Mos (whose brilliance is showcased in the aforementioned french bodice ripper section)

While the production is not always entirely successful with their endeavor, the sheer intensity of the cast's commitment shines through and when the nonsensical and jaw droppingly hilarious Rhino dance occurs any faltering is immediately forgiven, if not forgotten.

defunkt theatre has long been the champion of new works and avant guard productions and this is no exception. Bill Tripp's set and Josh Ailes sound design (in conjunction with Richard E. Moore's music) engage and alienate in equal measure. The play is otherworldly, satirical and occasionally profound. Lori Sue Hoffman once again proves that she is one of the best costume designers working in the city with timeless gorgeous costumes for the everyday apocalypse.  Gary Winter should be proud of this odd and charming world premiere, next set to be stage in New York's Chocolate Factory in  the spring of 2010.

At a lean 90 minutes , Cooler is the solid bet in town for a good time, oddly endearing and funny. It's a fitting close to James and Frances time in Portland. We wish them the best of luck in all their endeavors.  Go see this show! 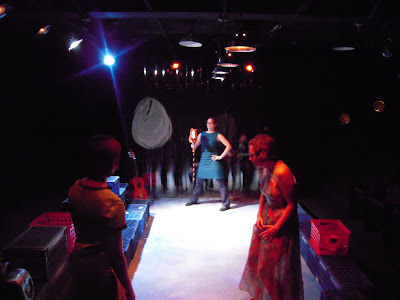 the world premiere of

at the Back Door Theater. 4319 SE Hawthorne Blvd. Portland, Oregon.

For more on the process of our production of Cooler, check out our website’s journal page.

This production is funded in part through a generous grant from:

and theatre at a reasonable price.

Posted by Andrew klaus-Vineyard at Thursday, May 07, 2009