To my first thursday friends.... 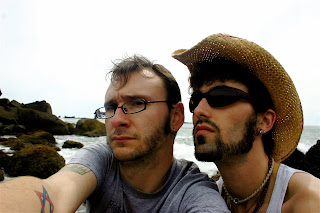 To my wonderful husband Taylor; to Matthew , Nance, Jon and Paul, and Em Brownlowe... thank you.
Last night Matthew and I were to attend a play I was to review but somehow missed curtain call (No finger pointing!!!-ok ok I had the wrong time written down-Thank you Tim for being so understanding) However I'm glad that actually happened as I headed down to Portland's First Thursday art event where a few friends were shopping for art.  I drank, I smoozed, I bought a painting (with money I should not have spent and without consulting my hubby),  but then the phone rang.
I've learned it's never a good sign when a parent calls you from the East Coast late at night on the West Coast. It was my mom on the line informing me she was home fine after more than 6 hours at the hospital "oh because the doctor thinks I either had a seizure, a small stroke or a small heart attack."  Apparently my mom was having a late lunch, swallowed soda wrong and passed out.  More tests are being run on the about to turn 50 year old (my mom is YOUNG!) and I'm more than irate that everyone( I'll be making calls to my family back in Georgia later today-errrr) waited to call me until AFTER she was home safe.... but thankfully she is and seems fine.
I wanted to say thank you to my friends who were randomly assembled and who kept me calm and distracted. Thank you guys I love you all.
Posted by Andrew klaus-Vineyard at Friday, May 08, 2009