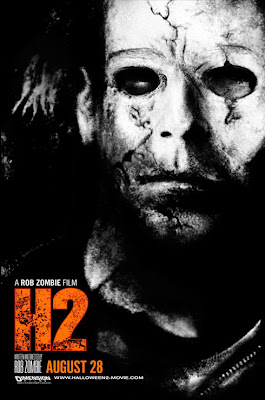 I have to admit that while many horror purest decried passionately Rob Zombie's re-imagining (not a remake) of the John Carpenter classic Halloween I found it to be a thoughtful  albeit furiously violent intelligent film that stands on its own merits while nodding to the original series. He's completing the story with his sequel which begins just moments after the first film ends and follows Laurie Strode ( Scout Taylor-Compton) to the hospital (as did the original sequel) but looks to divert that story immensely leaping two years with a agoraphobic survivor Annie (Danielle Harris) and a wildly out of control Laurie confronted by Michael's inexplicable return after apparently living in the woods talking to the voices in his head for years. Zombie's films are not for the squeamish and timid, full of nudity, extreme acts of violence and nonstop swearing but in their brilliant white trash glory he has come along way to illuminating something about the American psyche.  While the truncated House of a 1000 Corpses is clearly not totally successful I'd argue  Zombie distilled and perfected with The Devil's Rejects a goal that I feel Oliver Stone failed to accomplish with  Natural Born Killers. With Halloween  Zombie made us feel empathy and compassion for not only the teen victims of Michael Myer's but also helps us understand how Michael became what he becomes. It's the hero's journey into failure, the origin of a monster mythos. Enjoy our first look at the month of August's (????) most controversial release slate.