Clay Aiken -Bitter? Party of one? 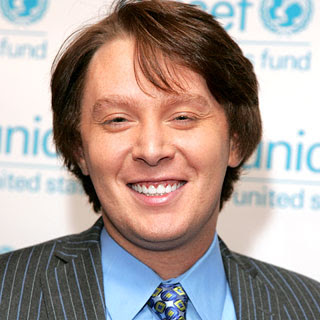 Clay Aiken- that bitter runner up who went from being the obvious, but closeted skinny boy with the big pipes to that guy who looked like a middle-aged doughy lesbian who reluctantly came out to the "shock" of his elderly fan base called "the Claymates". Not content with his tanking music career and stints on Broadway, nor the exploitive way he announced his homosexuality/showed off pics of his new born child, now the fat whiner from my former adopted home state NC (shout out to Greensboro! xo!) is attacking Adam Lambert and American Idol. I'm reposting his entire rant as I found it jaw droppingly arrogant and bitter to its tubby little core.

Now that it's all over, and for the record.... I couldn't be happier about the way AI ended this year. I only turn the show on once a season, and only to see what the set looks like each year. This year, I happened to turn it duringthe minute that Adam Lambert was singing "Ring of Fire" and, at that moment, thought my ears would bleed. Contrived, awful, and slightly frightening! I wasn't really a fan and found myself surprised whenever folks told me that they liked him. Granted, I never saw another performance (and many folks who I trust said that he was great) but I can't imagine I would have enjoyed it. Just not my cup of tea at all. To each his own. I never saw Kris sing on the show, but whether he was good or not is really relative. It's usually a matter of taste, right? But Idol is not always a matter of musical taste only. It's about the person you like. From what little I saw, Kris seemed likable. (That's not to say that Adam isn't just as likable as anyone.. maybe more so... I don't know) When Ruben and I were standing next to each other every night (many years ago) you had two equally talented, equally unlikely, equally unpolished contestants.... so it really was a matter of taste as to who was voted for. While some may argue that one of us was hyped more than the other, I don't feel that was the case. However, this year, there was an obvious bias. Not even having watched the show, I can tell you that I was WELL aware of the bias from the judges as to who should win. In my opinion, that is awfully unattractive. I don't think I am alone In my opinion, it all often comes down to that last night of voting.Until the finale, folks are voting for the contestant that they want to see continue. But, I believe that on that last night, the dynamic changes. No longer forced to choose one person that they want to see win, the audience can effectively vote AGAINST the person that they don't want to see win. In the case of season two this might have happened. There may have been some folks who voted for myself or Ruben because they didn't like the other of us. I was the nerdy little girly boy who some didn't want to see win, so they may have voted for Ruben. I don't know. .. But again, I feel that Ruben and I were fairly matched. We both had our detractors and negatives, but I feel we were both very worthy of being on that stage in that moment, and either of us would have been worthy of winning. The show was different then, and folks made it in seasons 1-3 because they were "real" people who happened to sing/entertain well. But, somewhere along the way, AI stopped being about real people.

In a battle between David and Goliath, my money is on David!

I think many voters got sick of being "told who to vote for". I think many were turned off by the blatant favoritism shown towards one contestant. Therefore, on that last night, they used their votes against a contestant that they were tired of hearing about and for the contestant who had been written off. And, at the same time, I think they voted AGAINST an American Idol that has, for four years now, been more about the slick productions and polished contestants than it has been about finding the raw talent that it did in its first three seasons.

Those votes for Kris were also votes to return the show to its roots of finding "real" contestants with undiscovered talent and giving them the chance to grow and shine. They were votes that said "we're tired of seeing contestants who already seem to know it all".

Will American Idol choose to listen to the resounding and clarion call that those voters gave them?.... "Enough with the pretention. More Rubens, more Clays, more Fantasias and Tamyras and Kellys please." My faith has always been in the voters. I think they have gotten it right every year (mine included). It's now up to American Idol to decide.e if it will finally REALLY listen to the folks that keep it on thair.