Make an Honest Man Outta Me. 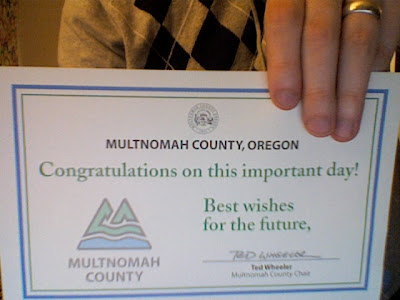 Hmm today let's see what was on my to do list:
Eat Lunch: check
Call Lawyer: check
get married: check
go to class: check
do the dishes:...
Yes we officially are Domestically Partnered, after 5 and a half years together (after exchanging rings three years ago) Taylor Vineyard and I got hitched at the courthouse here in less-than-sunny Portland, OR.  So hmm i guess this sets the ol' anniversary calendar over, so lets see I've been as-legally-married-as-the-state-currently-allows for about 7 hours now. Damn it yeah it's just a piece of paper and it shouldn't really change anything and it's still not equality, but I have to say it feels pretty damn nice currently.  We didn't tell anyone we were doing it, it was a sudden final straw "Lets do it now!" kinda moment and as unromantic as it may sound afterwards we went to our separate universities and went to our classes. My wedding cake as it were was a Payday bar and a Dr. Pepper during a transgender/queer studies class, but there is a weird calm here now. I can't put my finger on it but I think I may have finally just grown up.
Posted by Andrew klaus-Vineyard at Thursday, April 09, 2009