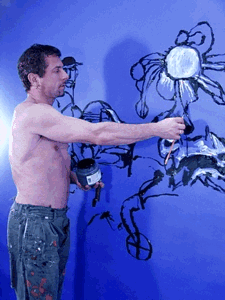 So I've decided to do a series based on my favorite things(cue The Sound of Music) and kinda give a tour of my interests. I decided somehow to start off with total Renaissance man Clive Barker, a man whom I've idolized and admired for years and whom once sent me a thank-you letter a fixed with a Disney stamp (it was Bambi if you must know). Largely known as a horror author (though he has arguably only written 2 full length "horror" novels-The Damnantion Game, and Mister B. Gone-the rest being more metaphysical fantasy) Barker is also an accomplished  painter, film maker( Hellraiser),  and producer. He has provided the source material for countless film adaptations, action figure designer, comic books series and video games. Somewhere along the way he also morphed from nerdy theater major to incredibly sexy daddy bear (though his voice has been scarred from the removal of a polyp from his vocal cord in recent years).  Clive Barker has to be one of my favorite painters working to day. He's come late to painting (at age 43)  and has birthed an impressive body of work in a bold colorful impasto technique.  A great catalogue of his painting work, Visions of Heaven and Hell was published in 2005 . Clive lives in Los Angeles with his husband of 12 years the photographer and designer David Armstrong.
He is a fairly prolific author writing plays, short stories, novels, novellas, screenplays and children's books. He came to prominence with the publication of The Books Of Blood his seminal collection of horror stories first published in 6 volumes in 1984. His children's books The Thief of Always and The Books of the Abarat Quintet (which are fully illuminated texts with Barker's own color paintings) are as riveting as anything he has put his pen to for adults, actually they read as a slightly less violent Clive Barker (and without all  the explicit sex of course)

I have to say after recently viewing The Midnight Meat Train (from a short story in The Books of Blood) I'm only gonna briefly mention it here and give it a full review later as it was amazing!

Below is the just released teaser trailer for the upcoming adaption of the title story from the Books of Blood.