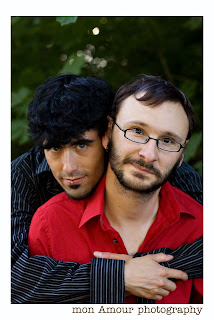 It's been a wild ride for a while. My life usually is. I'm always shocked at the kaleidoscopic view of crazy that surrounds me. I've had experiences I couldn't have dreamed growing up in a small town in Georgia. I've played concerts professionally with my band and solo, made short films that have played all over the world, gone to the bayou to work on feature films for tyrannical directors, had a dangerous and deranged female stalker and some how survived. This past week I turned 30. Last week I got "married".  I used the quotes because I already felt married, and its a domestic partnership, yet it feels somehow more solidified to some people in our lives. I received a birthday card from my mother-in-law something in 6 years has never happened, something I never dreamed would happen, someone is proud to call me so-in-law. This month I released my first complete new album in years. I spent nearly a decade as a hobbyist recording artist, and had all but given up the thoughts of release any material, instead focusing on my "film career".  I am shocked I have a film career. I've been archiving my art work on  THINK/FEEL (which has lead to some interesting conversations from friends who have stumbled across me naked there) but all in all I look around at my life- the pieces that were, the things that are and the seeds of hope for what will be and  I'm at peace for once in my life.
Since early childhood my life has been chaotic, familial strife, peers, the noises in my head, the desire to move forward even when forward was beyond the scope of your own imagination. I yearned for momentum. I have loved and lost, and I have lost some great loves along the way. Death has permeated everything I do. So many friends have died far too young. Illness, accident,  and sadly by their own hand I have lost a choir of angels who once soothed me, but whom I treasure and hope I can make proud.
It's interesting I was the first grandchild in my family, and the first boy born into a house filled with women . My cousin who was raised with me so close She is practically my sister is turning 20, me 30, (forgive me) my aunt 40 and my mother 50. I look at four decades in this family and where each of is and where we are. I've been criticized for being the family's prerequisite black sheep. ostracized for being gay at times, or simply just not understood. Make no mistake- i love my family- perhaps at times more than some of them deserve but that's family for ya.  No matter where I go I carry with me the soil and sweat and blood of my family and that Georgia farm. When I need to clear my head I'm back in it's pastures hot sun and wind whipping . It's  desolate and bountiful .
I'm at peace, thinking a lot about the past and the future and how they are created in the present. I guess that's my birthday present.
Posted by Andrew klaus-Vineyard at Friday, April 17, 2009