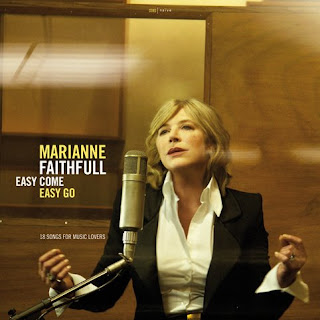 Easy Come, Easy Go the new album by iconoclast Marianne Faithfull  seems custom made for me and my frequent film collaborator, actress Crystal MacTaggart. A sequel of sorts to her brilliant 1987 Strange Weather,  Easy Come Easy Go is a collection of covers of such diverse artists as Smokey Robinson, Neko Case, Morrissey, Merle Haggard and the Decemberist. Faithfull's gravely lived in vocals add a new depth to familiar tunes and her brilliant lineup of guest "backup singers" is pretty much a who's who of impressive talent (Antony, Sean Lennon, Rufus Wainwright, Chan Marshall (aka Cat Power) Teddy Thompson, Nick Cave and Faithfull's ex-Keith Richards!!!)
The album was largely recorded live in the studio in 8 days and has a lived in yet off the cuff feel of a classic sixties jazz recording, albeit one with very rough experimental edges.  While I do miss the rich original songs of 2005's brilliantly stunning Before the Poison I really enjoy the radical re-imagining of many of these tracks, Dolly Parton's classic Down from Dover in particular. It's been amusing too the ire that she has drawn (as well as the odd opposite) for covering Neko Case's Hold On, Hold On (from Fox Confessor Brings the Flood) with people falling in polarized camps of Neko versus Marianne.
Posted by Andrew klaus-Vineyard at Sunday, March 29, 2009

oh hell yeah!! I was wondering if I should pick this CD up. I've been eying it, but I did not know it's a covers album. I love musicians takes on other musicians. I can't wait to hear it!