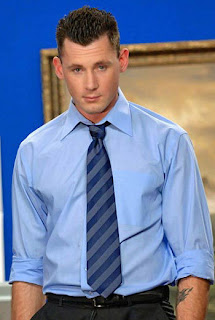 So apparently Barrett Long, the long openly bisexual G-A-Y porn star who's work I've -er-um- "enjoyed " in the past was recently interviewed on Howard Stern where he kinda-sort may have tweaked some details of his personal life like saying he gets $400 bucks (instead of his advertised $300) escorting and -oh yeah- he calls himself straight. So THE BIG LEAD, a sports blog had this to say about Barrett Long's appearance on Howard Stern where he claimed to have been paid for sex by various members of the Dallas Cowboys.
"Around 8:55 this morning, Barrett Long, an a male adult film actor, was on Howard Stern. He admitted to accepting oral from males for cash when times were rough, but insisted that he’s straight. He also said a member of the Dallas Cowboys once went down on him. Refused to mention the player’s name. Artie Lange instantly yelled 'Tony Romo!' but Long denied it was him. Then Long asked about Emmitt Smith, to which Long also said no. It almost sounded like Long recanted the whole thing when Artie asked about Michael Irvin, but we’re not 100 percent sure if he was kidding or not."
So yeah he also made it out like he barely does anything with guys in porn. So I thought I'd do something I've never done at Digging to China, post some of his work and let's see if you think that this is not really doing that much.
WARNING! Extremely
NSFW!!