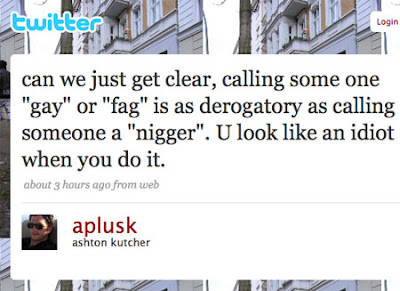 While not my thing, I do find Ashton to be oddly charming and a sweet guy despite he duffus persona. So he hurt his wrist at the gym on a punching bag (another reason I don't hit things) and someone called him gay on his twitter page. So this was his response. Kudos to Kelso (er I mean Kutcher) and good for Demi Moore, her man's a good egg.
Posted by Andrew klaus-Vineyard at Wednesday, March 11, 2009