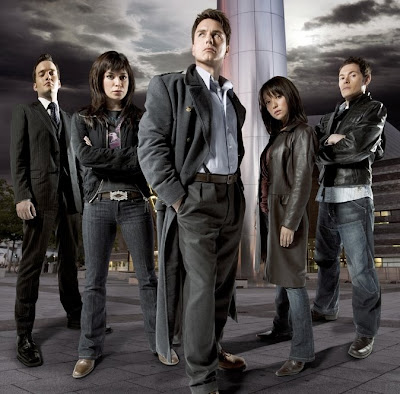 While I will spare you the text rendition of my guffawing shrieking happy dance, I will share with you the cause. The trailer for the 5 episode (in 5 nights!) 3rd Season/series of Torchwood (at 5 episodes isn't this a miniseries?) the brilliant violent and sexy spin off of the revamped Doctor Who. I found myself  stunned and excited  where I had once been slightly disappointed with this abbreviated season.
Doctor Who is also on an abbreviated 2009 year in the form of 8 episodes making up 4 two-part films before it returns with Series 5 in which we (sniff) say goodbye to David Tennant as the 11th Doctor (soon to be a household name) Matt Smith takes the reigns.