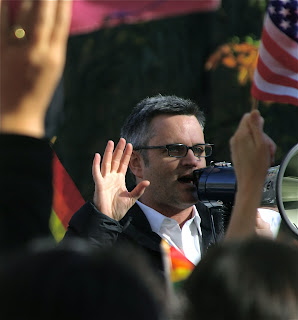 Sam Adams is still Mayor of Portland, he's hard at work trying to live down a lie he told to avoid this very witch hunt into his personal life. I'm still disgusted by Beau Breedlove (he's an opportunistic bottom feeder and not nearly as cute as everyone is making out) But here's an interesting look at the other players on the field: the vocal opponents calling for Sam's resignation or recall. Check out the Cast of Characters via the awesome Back2Stonewall.com

*Ex-Portland Mayor Tom Potter:
Tom Potter has been very vocal calling for Sam to step down and also for a recall. For those who didn;t know Potter endorsed businessman Sho Dozono against Adams in last May’s election

*State Sen. Avel Gordly
In an interview with the Portland Observer, Gordly had pointed criticism of Adams, who has opted to stay on despite a blaring chorus of calls for him to step down. Which is not surprising since Gordly also backed businessman Sho Dozono against Adams in last May’s election.

*The Oregonian Newspaper:
Right wing conservative newspaper. In the past Portland had a HUGE SANDAL with a TRYE pedophile Ex Portland Mayor Goldschmidt who abused a 14 year old girl. The Oregonian missed the story completely and was actually a supporter of Goldschmidt. Also The Oregonians circulation is slipping and the newspaper is trouble.

*Willamet Week and Reporter Nigel Jaquiss:
Willemette Week is a weekly alternative FREE newspaper in Portland. WW and Nigle Jaquiss originally broke the story about ex-Mayor Goldschmidt and the 14 year olg girl and Jaquiss won a Pulitizer. Can the extreme scrutiny and pounding of the Adams story just be another attempt to up circulation and win another award? Oh and by the way Nigel Jaquiss is a friend of Bob Ball.

*Just Out Magazine
Just Out Magazine is a weekly Gay Paper in Portland. Bob Ball told Just Out the ORIGINAL Accusations. Then let Sam tell his side. After Sam Adams won the election sudden;y Just Out called Sam Adams “Portlands Gay Man of the Year” then in January publically called for Sam to resign. Just out plays both sides of the fence but has ties to Bob Ball and has done numerous articles about him. Also Just Out is well aware of the fact that BEAU BREEDLOVE ACTUALLY WORKED FOR BOB BALL IN 2007. Did we know that? (It just gets fishier and fishier doesn’t it?) But Just Out doesn’t question OR make an issue out of that.

*Victoria Taft:
Victoria Taft is a Radio Talk Show Host and CONSERVATIVE REPUBLICAN has also been extremely loud and vocal for Sam Adams to resign. She has said his actions have turned Portland into a punch line. Funny though Victoria has done that looong before Sam. Victoria Taft is a Right Wing nutjob who’s talk show has very low ratings so she likes to stir it up. Last May she called on Oregon Republicans and Independents to register as a Democrat so they can meddle with the party’s tight race between Clinton and Obama. She has also asked Oregonians to sign a “proof of citizenship” letters and basically just starts blabbing about whatever rolls across her computer monitor, truthful or not to get ratings and if a Democrat is involved god help her. Many times Victoria Taft has been caught “making up news”.

*Jasun Wurster
a spokesman for the Recall Sam Adams campaign is no stranger to City Hall and is Portlands own “Reble Without a Clue” has had issues with Sam Adams in the past and the Columbia River Crossing. Jasun has also had problems with the group “Critical Mass” involving the new bridge. And on the past has accused the Portland police department of Police Brutality.

*Jack Bogdanski:
Jack Bogdanski of of bojack.org. Jack who is Ward Churchill of Lewis and Clark. Who was DEAD SET against Sam Adams for Mayor of Portland to begin with and had no qualms about ranting about it on his website. He has never been a supporter of Sam and has constantly disagreed with almost everyhting Sam Adams has ever said or done even before being Mayor. Bogdanski is one of Portlands more “famous characters”. Bogdanski destroys his own credibility with his obsessions which he recognizes. Bogdanski at one time decided to stop updating the blog–which attracted an average of 500 visitors a day–because he was becoming obsessed.
Sam has since become Bogdanski’s latest obsession to the point where the law professor now twists the facts and resorts to name calling.

And then we come to our last WITCHUNTER GENERAL in this cast of Charcaters.

*P.J. Mulcahy:
Mulcahy is a Construction Contractor out of Beaverton Oregon and his reasons for Sam’s removal is pretty straight forward. And I quote:
“Adams is sending a message to our children that the gay life is OK,” Mulcahy said.

This is Wolf from Back2Stonewall.com. Sorry about all the typos above. It was 6AM and I was sick. LOL.

Thnaks for using the info.

It does seem that those who are calling for Sam's recall have alot of other issues.