Otto; Or, Up with Dead People 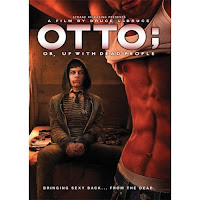 Canadian auteur/provocateur Bruce LaBruce's latest film,Otto;Or, Up With Dead People, comes out on DVD on Tuesday( 02-10-08) here in the States and this time German Leftist Radicals( The Raspberry Reich  a  flick I love!) have been replaced with gay zombies. Otto is a "zombie" who wanders the streets alone before hitching a ride to Berlin looking for answers to his former life and making friends and influencing people along the way, and some how winds up in an epic political-porn horror film called Up With Dead People!
Otto; or, Up with Dead People from Josh Posh on Vimeo.
Posted by Andrew klaus-Vineyard at Saturday, February 07, 2009