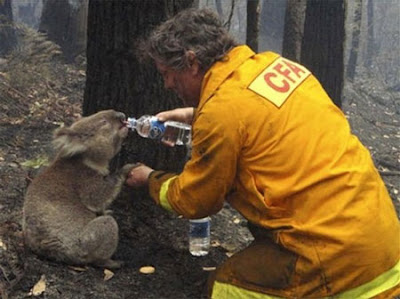 With the death toll of 200 and rising the devastating fires sweeping Australia are unimaginably brutal. While in no way diminishing the cost of human life, what's often overlooked is the deaths of hundreds of thousands on animals in the fire's path. Koala's are notoriously grumpy critters and leery of humans. When a firefighter spotted a koala with scorched paws trying to cross the blackened earth he followed the injured creature. I'm pretty sure you get a get out of jail free card for this, the opposite of all those going to special hell like child molesters and people who talk on cell phones in a movie theatre.  From the Associated Press:

"The koala moved gingerly on scorched paws, crossing the blackened landscape as the fire patrol passed. Clearly in pain, the animal stopped when it saw firefighter David Tree following behind. 'It was amazing, he turned around, sat on his bum and sort of looked at me with (a look) like, put me out of my misery,' Tree told The Associated Press on Tuesday. 'I yelled out for a bottle of water. I unscrewed the bottle, tipped it up on his lips and he just took it naturally. He kept reaching for the bottle, almost like a baby.' The team called animal welfare officers as it resumed its patrols on Sunday, the day after deadly firestorms swept southern Victoria state. 'I love nature, and I've handled koalas before. They're not the friendliest things, but I wanted to help him,' Tree said."