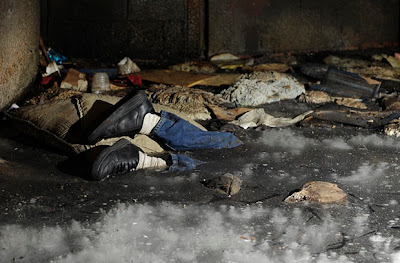 I have had this pic and story sitting in a file for a few weeks, the irony not lost on me. 56 year old Johnnie Redding died, and was frozen in a block of ice in an abandoned elevator shaft. In the abandoned warehouse where his body lay dozens of homeless men and women camped around his body for over a month, non reporting the frozen corpse. The body was eventually discovered by a group of soccer players who turned urban explores and decided to explore the abandoned warehouse. They waited 2 weeks before reporting the body.  it took 3 separate calls to 911, a reporter was notified and went to see for himself the frozen man, he took pictures (see above) and returned to the police.   This is a horrific case of indifference and shows that we are so self involved as "individuals" now that we for get to be part of any sort of collective humanity. It pains me deeply to think of this man's family wondering where he was, to hear of the grisly discovery of the frozen corpse and to learn so many knew of it's whereabouts and did nothing. Shame on us all.
Posted by Andrew klaus-Vineyard at Sunday, February 15, 2009

I can't believe your blog is how I am finding out about this...