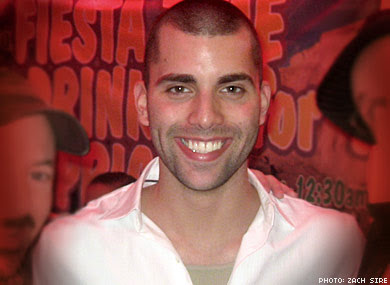 Opportunistic (and mark my words F-A-T by 30) Twink Beau Breedlove just refuses to go away. It's official folks,  as I have previously reported here, Beau is posing nude for Unzipped magazine(he's actually already posed, the issue hits stands and the internet in May), and yeah, We'll all look at your junk Beau, though to hear tell, you've been flashing it for free and putting out for a few cocktails for years here, so not sure why you are asking for a pay check now?  After we have officially sized you up will you do us all a favor- go the fuck away! Move to another town and give the right wing in another state fodder for their righteous anger. You've done enough. Thanks.
Look I don't usually write so cattily but this bottom feeder  (no,  pun intended) needs to go away so this city and our mayor can move on. Let Sam Adams do his god damn job and not be asked to comment on the whipped out and airbrushed cock of a fling he had four years ago.
I'd like to point out Beau is an asstwat who's totally been played here because he is either too stupid or too selfish to see that his issue hit stands in May, just 4 weeks before a recall can be called be demanded Sam Adams (who is fairly untouchable for 6 months- which will end in JUNE!) You have aided the enemy so completely here you little shit I am speechless.
Also Read a book you dumb fuck Lolita, your dog's name, is a reference to Nabakov's brilliant novel of the same name NOT Amy Fisher.
Maybe you should trade your dance card for a library card.
Just a thought.
Posted by Andrew klaus-Vineyard at Tuesday, February 17, 2009