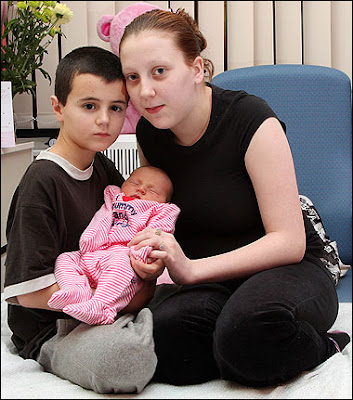 Okay first we had the single-unemployed-plastic-surgery-prone-Angeline Jolie-wanna-be Nadya Suleman and her octuplets (bringing her brood up to a whopping 14) some of which sadly have severe developmental disabilities and something the eight new may be prone to as well.  Now this: 13 year old Alfie Patten and his 15 year old girlfriend Chantelle Steadman just welcomed  home their baby girl Maisie Roxanne.  He was 12 when the baby was (ill) conceived. The photo above shows the "happy couple" the 4 foot tall Alfie(who looks all of say, 8 years old) and girlfriend (who I would argue is a sexual predator) and baby.
The barely pubescent child when asked what he planned for the future, financially in a televised interview responded, "What's that mean?" Seriously ! When asked how much he thought a baby would cost he responded

I thought it would be good to have a baby. I didn’t think about how we would afford it. I don’t really get pocket money. My dad sometimes gives me £10.”

Okay so We have this surgery procedure obsessed woman popping out a litter of possibly disabled freezer-pop babies, children preying on younger children and making babies- and yet the idyl in America is anything BUT a gay couple having/raising children. 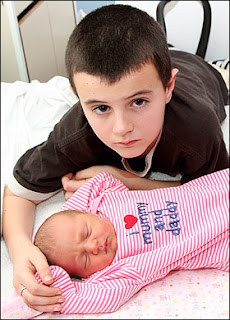 THIS CHILD IS A FATHER!
I am just pointing these things out. I really have no personal weight to throw behind my righteous indignation as I do not currently have children, though I do want them and do have quite a few kids in my life. In fact this week I had to deal via phone with a custody battle in my family involving two just out of their teens(and one not out of) married folks and the battle over their baby.  Children are not a right folks. They are a responsibility. I am disgusted to my core that in both the Suleman case as well as this sad sad case in the UK the responsibility for child care will fall ultimately not to the "parents" but to their families and society at large. There is a dominantly placed DONATE HERE button on the disgusting Thenadyasulemanfamily
website. It's sad that in a time where the LGBT community must fight tooth and nail to have their families, their relationships, their very lives recognized and made safe these assholes can parade about.
Posted by Andrew klaus-Vineyard at Friday, February 13, 2009