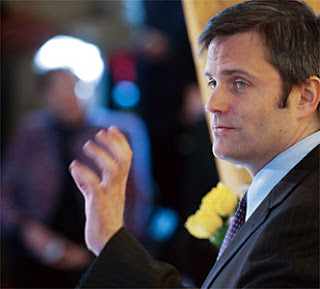 I've thought about it and thought about it. Sam Adams confessed to having an
"affair" with an 18 year old former intern, Beau Breedlove. So what. Breedlove was 18, yes they met when he was 17 but seriously folks we ship off our boys to be mangled and mutilated with shrapnel in Iraq but an 18 year old young MAN is not capable of consensual sex? Give me a fucking break. While I am saddened that Sam chose to lie about the  relationship  I completely understand why he did. Anytime an older man and a younger man hook up people shout pervert and pedophile. When a heterosexual man does it it's called a " trophy wife/trophy fuck". Heterosexual women now aspire to be "cougars" like Kim Catrell's Samantha on Sex and the City or Demi Moore, in real life. But asymmetrical intergenerational homosexual relationships scream molestation and daddy issues. I've decided despite his lie (which was a bad move, bad Sam!) I will stand by his side and come to his aid anytime. He made a mistake.
I'm so fucking sick of the ageist bullshit. It's such societal homophobia that pushes this issue. They were two consenting adults. Adults, folks Adults, they are still friends. Just because two men fuck does not mean they are criminals, which is the implication here. In decades past this would not be an issue nor discussed so publicly.  I think this issue is an issue of sexuality.  How many Senators , congressmen, PRESIDENTS (Bill, I'm looking at you!) fuck younger women, interns ect. , while married in office? This was no adultery, this was a man coming out of an 11 year relationship, a newly divorced man on the dating scene which as a Portlander myself I must say is slim pickings when it comes to good quality guys (sorry it's true!).  Beau Breedlove was a hot younger guy who was smart and attractive and clearly an ego boost.  We've all dated the ego booster, god knows mine was impetus to move cross country- to get away from him.  People should be annoyed he lied but not crucify him for sleeping with another GROWN man. If 18 is not adult enough for Americans the lets recall our service men and women of that age. If they can be sent to take a bullet they should be allowed to make the choice to make love to the person they choose.
Also Beau was never Sam's intern, he was a legislative intern in Salem, so there is no ethical issue there either folks.
Posted by Andrew klaus-Vineyard at Monday, January 19, 2009

The fact is that if I lied on an application to get a job and was found out I would be fired. The way he played dirty pool against Sho during the election was borderline for me; accusing him of stealing money from a child's trust fund for his business. That was messed up. Despite this I thought Sam was the best man for the job. I am not yet cynical enought to expect every politician to be a liar. I also don't think it's right that a 42 year old man goes to an 18 year old's birthday party for sex. I have kids, a son and a daughter. If there was someone of either sex 25 years older coming to their 18th birthday to have a sexual relationship with either of them I would have a definite problem with that.
Sam had a big responsibility being the first gay mayor of a major city and he let down the gay community. He gave all the closed minded homophobes a lot of ammunition by these actions.
The sad part is that he is very qualified for this post, the best candidate we have, but he needs to step down. He can't win this trust back.

I actually agree with much of what you say but let's be clear he didn't go to the birthday party for sex. Also as a parent you should be aware that however uncomfortable it may be that your children grow up to be mature sexual beings. and while an 18 year old guy doesn't do it for me personally (I prefer a man with more experience) Beau was an adult and fully in charge of his sexuality. You may disapprove but frankly it's not up to you. I don't mean that rudely. It was not up to my mother and father whom I chose to have sex with at 18, not their decision now. Nor is it my cal who they sleep with. or whom my children will when they are of legal age. Your statement use the word RIGHT as "I don't think it's right".. That's a moral judgement that expounds on your belief system as to normative behavior that just does not exist nor apply to other individuals. It's for each to decide themselves. He wasn't a sexual predator. Clearly he was pursued by Breedlove. Yes he was 17 - guess what when I was 17 I had sexual urges and fantasies and acted on more than my fair share of them. So yes I believe there was interest, but I also think they were smart enough to wait until he turned 18.

Thank You! Your insight is refreshing!

You have GOT to call me. I've got inside stuff on this but I can't post it. Let's just say Salem is a small town and Breedlove is a uncommon name. Call ME! BTW: This is all bullshit. Beau was 18.
Crystal