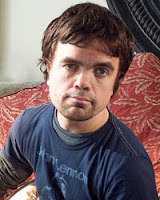 Soulful, brooding, surly, sexy, smoldering, unpredictable and versatile actor Peter Dinklage is my second pick for the Beauty in the Eyes (of the Beholder) Series.  The prolific actor has been seen in a wide variety of projects and the 2003 film The Station Agent is perhaps one of the best American films of the this decade.
Dinklage was born with achondroplasia and is a mere 4' 5" tall but he towers over most actors of average height. Whenever he shows up I can't take my eyes off of him. Brilliant!
Posted by Andrew klaus-Vineyard at Wednesday, January 21, 2009