I resign :reflections on Sam Adams, the Rally and the harsh light of day. 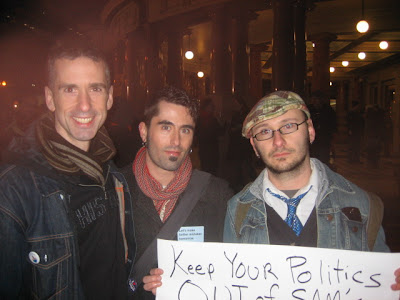 "Keep Your Politics Out Of Sam's Bedroom!"
I support Sam Adams. I always have and will. He is, in fact, the person I think who is  best suited to govern Portland. He is everything we love about Portland, bike riding, quirky, sexually free, and flawed. just like Portland. Just like every one of us. A Human Being.
I can forgive Sam for Lying, as I've stated on this very blog I completely understand why he did. Yes, there was a right answer : "Yes or NO" but the more appropriate one would have been "It's none of your damn business." If only he had said THAT!
I was at the rally showing my support for the politician, the man I wanted to run my adopted hometown. My friend Matthew pointed out how great it would be for, Olive the daughter of his lesbian friends to grow up in a town with a openly gay mayor, but now that's not going to happen.
I'm heartbroken as I write this resigning myself, that while I still think the lie about ones personal life is none one's business, and still firmly believe this scandal was the work of jealous rivals who couldn't get backed for their own mayoral aspirations, nothing can undone the damage done. The latest revelation from Beau Breedlove that the two shared 2 kisses before he turned 18 does nothing to help the cause, especially seeing as how one was in the second floor men's room of city hall after a party at Sam's office.  And while the accompanying photos of Beau playing with his dog and defending Sam are human and tasteful, the dog being named Lolita is not making this ANY BETTER.
I went to the Rally to show Sam that yeah we acknowledge he mad a huge error in judgment by lying but that apology accepted get back to work. I think a fairly sizable segment of the protesters were there as a hip gay-see-and-be-seen. Some , like the snarky boy who chatted with my husband and I before the rally was full of fiery righteous indignation but was misguided and clueless when it came to any facts of the case or even who the people involved actually were. Portlanders love to protest. I agree the newspapers who supported Bill Clinton during his scandal should have been more supportive of Sam, but that said they know Sam personally, they felt betrayed. Well as a sign I read stated "HE'S YOUR MAYOR, NOT YOUR BOYFRIEND PORTLAND! "
I wanted nothing more than Sam to get back to work, I think personally that is what he should have done on Thursday, back to business as usual. Surrounding himself with the supportive A-gays of the Portland arts scene was a misstep, not entirely of his own making. There was a lot of people there who were just trying to push their own agenda, but a lot also who had their heart in the right place. Dan Savage was there and with his usual wit and smarts made a great case for supporting Sam and was equally appalled by the media stoking the fires.
I want Sam Adams to be my mayor. He's a good man. we all know that. He took the time from his busy schedule last month as mayor-elect to call me personally when he heard news of my husband's false arrest by Portland State campus security and he made inquiries into the matter. He didn't have to do that, a few of his higher profile(in Portland at least) supporters certainly did not do that for us when they heard of Taylor's case (Byron Beck I'm looking at you!)
After  hearing the news Sam plans to return to work tomorrow followed by the Oregonian's interview with Beau, I just don't see how it is possible for Sam to stay in office and accomplish all the things we so desperately need him to here in Portland. I want him to, I want to believe he won't have to be beholden to so many to stay, but I can't see how he won't be recalled anyway in six months. His enemies will still be there, and this campaign to remove him, and his own admission of lies has cost him a few friends as well. It's heartbreaking. I resign myself to the fact that this is out of our hands. Hell I have my own sex scandal to deal with here with Taylor. I wish Sam the best , I do. I wish Portland the best.
We need to heal here, we are all hurting and turning on each other is not helping, if anything it makes the gay community more vulnerable to persecution. REAL persecution.
(Dan Savage, Taylor Vineyard and Andrew Klaus at Support Sam Adams rally .photo by Jon Miller)
Posted by Andrew klaus-Vineyard at Sunday, January 25, 2009