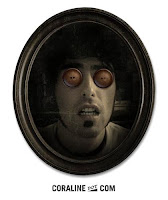 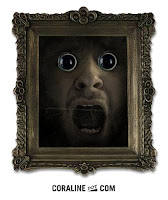 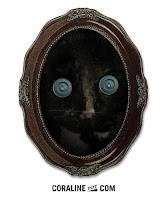 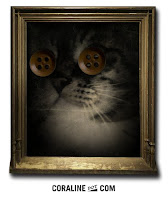 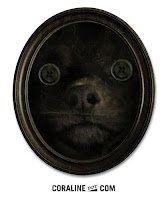 Laika, the Portland Oregon based animation firm has produced, what i hope to be a masterpiece. Directed by brilliant weirdo Henry Selick (A Nightmare Before Christmas, James and the Giant Peach) Coraline is adapted from Neil Gaiman's not-quite -for-kids novel about a young girl's journey through a door in her home that leads to a mirror image world with an Other Mother and Other Father, who want only the best for young Coraline, if only she'll gouge out her eyes and replace them with buttons like theirs.... (see not-quite-for-kids!). I loved this book immediately and immensely. I even have Neil Gaiman and the equally impressive P. Craig Russell's graphic novel adaptation of the book which adds new dimensions of tension and terror. Here's the thing, the film has been adapted with kid's in mind, which is great. AND IT'S STOP MOTION! AND IN 3D!!!!!!!
I've been lucky enough to see several clips and even had the pleasure of having dinner with Coraline's production manager . So I'm urging everyone to read the book! and see the film which opens in February, and if you have the time (which you do) head over to the official website and replace your eyes with buttons.
Posted by Andrew klaus-Vineyard at Thursday, December 18, 2008