McDonald's- I'm NOT lovin' it! 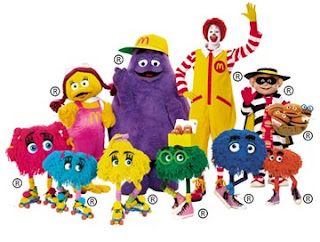 So our good buddies at the American Family Association (AFA), the right-wing fundamentalist evangelical Christian fringe group have threatened to to boycott McDonald's over its $20,000 donation to the National Gay and Lesbian Chamber of Commerce and the fact that Richard Ellis , chief of communications for McDonald's was named to the board of the NGLCC. No big Deal right? Just ignore them. .. right? Well This ain't no happy meal! Ellis stepped down from the chamber position and has "transferred " to the Canadian branch of the McDonald's global powerhouse. Also McDonald's will no longer be associating with the NGLCC stating

"It is our policy to not be involved in political and social issues. McDonald’s remains neutral on same-sex marriage or any ‘homosexual agenda’ as defined by the American Family Association."

The AFA is gloating thanking McDonald's for "no-longer supporting the political activities of homosexual activists."
A boycott by AFA carries little weight, a global behemoth like McDonald's would have lost little revenue to these fundamentalist. It's interesting that they state they stay politically neutral while bending to the will of another political group with their own dangerously bigoted agenda.  The Reverend Dr. Steven Wayles  states the case best :

Tragically, the American Family Association is listed as “Christian group.” They are engaged in an activity with which Jesus, founder of their faith and their boss, was always in conflict: excluding those at the margin of society (the little ones).
The fact that McDonalds caves to the whims of these folk is sad, indeed.
The air is leaking out of the tires of the Christian Right Wing bus. They will continue to attempt damage, but history is against them. The Christian Right has never been right.
Wrong in saying the earth was flat. Wrong on dismissing science, including evolution. Wrong on Slavery issue - Right wing was pro-slave. Wrong on declaring the races to be unequal because of God’s design - and punishment of the black race!! Wrong on declaring women to be ‘inferior’. Wrong when they forbade innoculations against disease. Wrong when they forbade blood transfusions. Wrong when they burned gay people at the stake. Wrong when they burned intelligent women as ‘witches.’ Wrong when they forbade transplants of organs. Wrong when they resisted civil right for African Americans. Wrong about being against women’s right to vote. Some that many right wingers are still wrong about: Wrong about forbidding women’s ordination. Wrong about folks being glbt as ‘choice’ rather than something that is discovered or revealed.
Wrong about being able to influence people into being gay! Wrong about the way they read gay lesbian issues into the Bible. Wrong about so called ‘reparative therapy’ to make gay people straight! Oh, yes, and wrong about boycotting McD’s for helping those at the margin.
We need to help Mc Donald’s to regain their original proper perspective.
Their caving to AFA is a political issue. I don’t want McDonalds to have to undergo the embarassment that those business supporting ’segregation’ had to face.
Rev Dr Steve Wayles

Oh the plot thickens : Turns out now -AS I TYPE THIS that the AFA is as usual is apparently lying.  This is a statement from the NGLCC:

Statement by the NGLCC Regarding the AFA and McDonalds

The National Gay & Lesbian Chamber of Commerce (NGLCC) exists to foster relationships between major corporations and businesses owned by LGBT people and to ensure a fair and equitable workplace for all Americans. The NGLCC does not lobby on the issue of same-sex marriage. The NGLCC’s number one legislative priority is access to quality and affordable healthcare for our business owning members. The mandate of the NGLCC is to foster strong businesses, and not to pursue individual political agendas. In these trying economic times, now more than ever, the NGLCC is committed to ensuring our member businesses continue to be a strong and vibrant part of the small business engine that makes the U.S. economy run.

Like all our corporate relationships, McDonald’s USA has been a good partner with the Chamber. There has been no discussion between the NGLCC and McDonalds regarding continuing membership, nor has the NGLCC been notified of any move not to renew our work together. The NGLCC will continue to align with corporate America in support of equal opportunity for all of America’s workers and small businesses.

For more information about the NGLCC, please visit

Well either way the food is a health hazard.
Posted by Andrew klaus-Vineyard at Saturday, October 11, 2008