A Lion Among Men 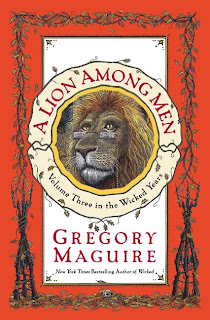 Currently reading the second sequel to Wicked: The Life and Times of the Wicked Witch of the West , A Lion Among Men and thus far am very pleased. While it is not a direct continuation on the events that ended Son of  A Witch it all ties in nicely and is an interesting twist on the story thus far and on Maguire's use of OZ-mythology.  A fourth and final book is said to be in the works possibly focusing on either Dorothy being brought back to Oz and placed on trial for murder (while I hate that character I'm not sure how well that would play) or on Lady Glinda the "good witch" whom I think is a much more interesting  lead character.
It's interesting to discover that Maguire disliked the Lion from both film and book versions of the Wizard of Oz, surprising since he has chosen him as the focal point in this war era tale with the dubious task of  interviewing the ancient oracle Yackle.  It's a continuation on his theme of fate and destiny, this one particularly reminding me of the choices people are forced to make for their own survival during political struggle. How cowardly is it to remain alive? The Lion ( Brrr) is viewed as a traitor to the talking Animals for working for the (wicked)  Wizard of Oz and opposing Elphaba, the martyred terrorist witch of the west, but also never accepted amongst men, well for obviously being a talking Lion.
Perhaps not so unexpectedly the book paints Brrr as a lonely outcast homosexual Lion longing for human companionship, which puts the reader in the unenviable place of feeling for a character who has betrayed one we hold dear.  All and all a great addition to work of Maguire.
Posted by Andrew klaus-Vineyard at Monday, October 20, 2008