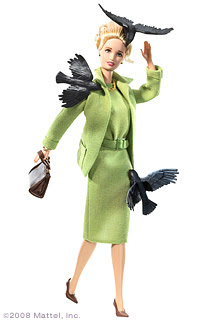 I am not a gay man who collects dolls. Nor did I as a child ever want a Barbie of my own...  until now. HOLY HITCHCOCK!  The Tippie Hendren as Melanie Daniels (hmm and she named her daughter Melanie....) from the Birds Barbie is  SWEEEEEEEEEET!
Think of all the great post-modern play time options your child could have with one of these. I want be Barbie- I woman playing a woman playing a woman in danger and in love... it's very David Lynch- oh god wouldn't Twin Peaks girls Barbies rock! Audrey with cherry knots , Laura, wrapped in plastic.... I digress.
Also from Wikipedia and the LA Times
:n a recent LA Times article, Ms. Hedren was described as being a pivotal figure in the modern development of Vietnamese owned nail salons in the US. She was apparently drawn to the plight of Vietnamese refugees from the Vietnam War and in 1975, helped 20 Vietnamese immigrants by having her manicurist teach them the skills of the trade. This single event in history has been cited as the genesis of the modern proliferation of Vietnamese owned nail salons in the US
Posted by Andrew klaus-Vineyard at Sunday, October 05, 2008