True Blood (Sookie Stackhouse comes to to the small screen!) 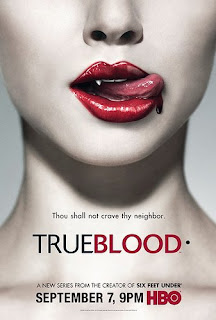 Okay full disclosure: While I have been reading Charlaine Harris' Southern Vampire novels for years I did so reluctantly. It's a seriously snobby trait of mine but I hate mass market sized paperback books, I do! I hate them! And also I'm not the biggest fan of sci-fi fantasy series novels, I'm nerdy enough without shopping out of the fantasy section. My hubby made me read the first installment and damn him I was hooked.
I grew up in the superstitious ghost filled south, but don't really go for the Anne Rice vampire melodrama, I've read some of them for sure but they drag on. However The Sookie Stackhouse books are punctuated with wry humor and sassy southern charm and more weirdness than you can shake a stick at. Set two years after vampires have "come out of the coffin" (see hooked already)  .
Alan Ball (American Beauty, Towelhead, Six  Feet Under)has shifted the time frame for his HBO adaptation just a bit setting the action Post-Katrina, which does occur between two later novels. I don't fault him, as a Southerner (and fan of the bayou state) I'm not ready to watch a re-enactment of hurricane Katrina anytime soon. Anna Paquin Stars a Sookie Stackhouse a telepathic small town waitress who gets mixed up with a sultry and seductive        " Vampire Bill" Compton. Mayhem ensues in a world where we come to meet werewolves, vampires, shape shifters, all sorts of mythical creatures, not to mention the monsters of a ferociously mortal kind-Humans.  Treating the vampire as allegorical metaphor is nothing new but the social issues here feel surprisingly fresh and when a sign on a Fellowship of the Sun Church, a anti-vamp congregation, Reads GOD HATES FANGS one can not help be reminded of nut-job sociopath Rev. Fred Phelps and the Westboro Baptist Church.
Last night the show debuted and frankly it's bloody brilliant!
I couldn't resist the pun, sorry. But for the faint of heart it's not. It's sexually and violently graphic, so if you're turned of by sex and blood- wait, if you're turned off by sex and blood why are you watching a vampire show in the first place?!  Look yes it's filthy! Yes it's violent, and scary, and hot! The women are sultry and sexy and the men are frequently naked or shirtless, the humor is snarky and sexy, did I mention the show is sexy?
It's truly bloody brilliant!
Posted by Andrew klaus-Vineyard at Monday, September 08, 2008