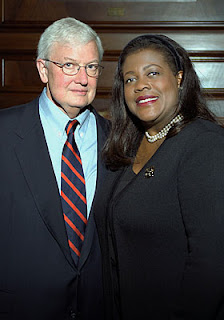 GOD Bless this man! I adore Roger Ebert. I love that He and Richard Roeper walked out on AT THE MOVIES which is now an unwatchable  cheap looking low rent travesty of a critique without them because the networks wanted to skew younger. So here is my latest favorite panned review by Ebert- Sarah Palin and her completely bullshit interview.
SOO GOOD!
Also an ass wipe fellow critic took a literal pop shot at Ebert for tapping him on the shoulder during a screening at the Toronto film fest- but you see ROGER EBERT CAN NOT SPEAK! having lost his voice to cancer treatment side effects.
Hot-momma Caz Ebert, Roger's wife said upon hearing the news a few choice words which Ebert responded to.

"Her reaction when she heard: 'I'll get a no-neck guy from the West Side to break his knees,'" he recalled. "Just rhetorical, I trust."