Lovers of the Arctic Circle 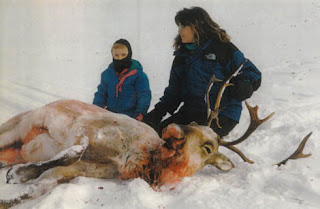 AS If these issues were not enough:

01.        She is presently under investigation in Alaska for abuse of power

02.       She believes creationism should be taught in public schools

05. She has no federal or international experience.  Prior to being governor (for less than two years) she was only the mayor of a small Alaskan town and a beauty queen!

06.       She believes global warming is a farce and is opposed to listing the polar bear as an endangered species

07.        She supports drilling in the Arctic National Wildlife Refuge and anywhere else big oil wants

08.     She supports Pebble Mine which will destroy the richest salmon run in the world

09.     She supports aerial shooting of bears and wolves even though Alaskans voted twice to ban the practice.

Now comes news Palin's 17 year old daughter Bristol (seriously Track, Bristol, Trig? She should not be allowed to name children) is pregnant.  Hmm, this amidst growing speculation that  Palin's 4 month old son with Down's syndrome Trig Paxson Van Palin (seriously Trig?!) is in fact not her child at all but her grandchild. Trig is widely believed to be the son of Bristol Palin. While I find it bizarrely admirable that a mother would fake a pregnancy and lie to cover up her daughter's mistake, albeit a bit desperate housewives for my taste. Check out this clip of Palin talking about motherhood and Alaskan politics. Supposedly she's about 3 weeks from delivering in this. Look at the body positioning, notice she never once mentions her impending delivery. 8 months pregnant, yes and I'm the Jewish Pope.

McCain will clearly act shocked and disappointed when the truth comes out and quickly replace this anti-feminist throwback with some heinous neo-conservative fascist. Shades of Harriet Meirs here.

Checking with the Anchorage High School that Bristol Palin attended, reporters were given word that her family had taken Bristol out of school due to contracting infectious mononucleosis. The amount of time Bristol was absent shifts from five to eight months.

Mono can last anywhere from two weeks to three months, but an eight month infection is a freak oddity. Yet it remains a common excuse given by girls in private & Catholic schools around the nation when pregnancy comes into play. Not the first time, not the last time.